Posted on July 17, 2020 by lynnsreversegapyear 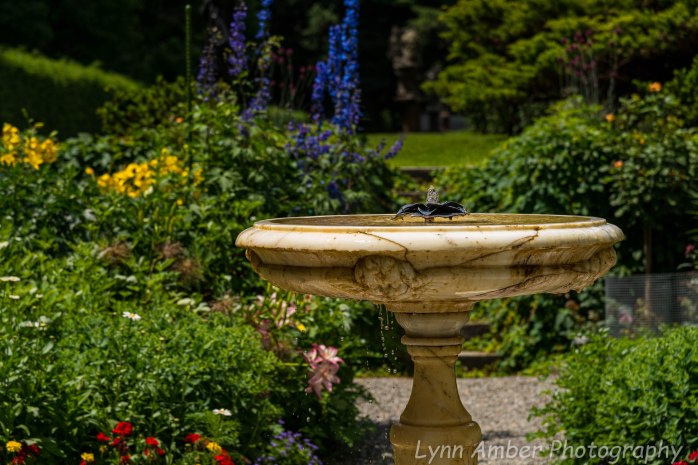 Yesterday, I mentioned embarking on a short road trip.  I have been craving a visit to a public garden and heard that the mansion at the Marsh-Billings-Rockefeller National Historic Park maintained some formal gardens reminiscent of the original gardens of the former estate.  I’m so ashamed to admit that I’ve lived in Vermont 20 years and never visited our only national park! It’s literally in my backyard – only a 45-minute drive from my home. Oh well – better late than never!

Marsh-Billings-Rockefeller National Historic Park was established by an Act of Congress in 1992 and officially opened to the public 6 years later on June 5, 1998. The park’s mission is to support efforts to preserve and interpret the history of conservation and the evolution of land stewardship in Vermont and the country. To understand this history, it is important to acknowledge and explain the contributions made towards conservation and stewardship by the three main landowners and visionaries of the farm.

Known as the “father of the American conservation movement”, George Perkins Marsh grew up on the farm in Woodstock in the early 1800’s. He noticed the impact that deforestation and irresponsible agricultural practices were having on the land around his homestead and throughout Vermont.  After graduating from Dartmouth College, Marsh eventually become a legislator and diplomat. His diplomatic travels around the world introduced him to landscapes that were severely impacted by adverse environmental practices and he was able to see first hand the measures that Europeans were employing to remedy the problem. In fact, it was during that time in 1864 when Marsh wrote Man and Nature.  He argued that human impact on the environment was substantial and advocated for conservation of our natural resources and the practice of sustainability and good stewardship of the land. His premonition that unchecked human alteration of the environment would lead to climate change appears to have come to fruition. Think about that for a minute. He wrote Man and Nature over 155 years ago!  We are slow learners.

The second owner of the original farm was Frederick Billings, a Vermont native who purchased the Marsh farm in 1869, after a number of years away from his home state making his fortune as a lawyer and real estate baron during the San Francisco gold rush. He had a deep appreciation for the natural world and was influenced by the writings of George Marsh. Billings studied dairy farming and forest management practices with an eye towards conservation of resources and sustainability. With the help of his farm manager, George Aitken, he created a model dairy farm and advocated for responsible agricultural and forest management methods. His vision helped to bring Vermont back from the deforestation practices in the late 1700’s and early 1800’s.  After his death, his wife and daughters continued to operate and expand the farm into the 1900’s.  I love a story that includes strong, independent women!

In 1934, Laurance Spelman Rockefeller entered the scene when he married Frederick Billings granddaughter, Mary French.  A serious conservationist and philanthropist in his own right, he and his wife furthered the efforts of the original farm which they inherited in 1951. Together, they remodeled the mansion and updated the farm and dairy operation.  In the early 1980’s, through the educational institution the Rockefeller’s founded – The Woodstock Foundation – they created the Billings Farm and Museum.  And, in 1992, Laurance and Mary donated the mansion and surrounding forest to the National Park Service for the purpose of promoting conservation, recording the history of the rural, local area and educating the public on the need for good land stewardship.

Today, the property is managed through a partnership between the National Park Service and The Woodstock Foundation. The Billings Farm is a working farm and the museum focuses on the agricultural and rural life of the time period. The Billings Farm and Museum recently re-opened after being closed due to the pandemic.  Unfortunately, I did not realize that the buildings are closed Tuesday and Wednesday!  So, I did not have the opportunity to visit the museum the day I arrived.  The park visitor center and other park buildings remain closed at this time.

The goal of my recent trip was to spend time in the formal garden near the mansion and walk some of the nearly 20 miles of trails. As I was walking towards the visitor center from the parking lot across the street, I happened upon a park ranger.  I asked him if it might be possible to get a print map of the property and followed him to the visitor center where maps were available in an outside display. He suggested a walk to Lake Pogue which would be a 3.5-mile round trip and outlined my route on some of the carriage roads throughout the property. He mentioned that the garden was not up to speed this summer due to the lack of availability of plant material as a result of the pandemic. I decided to check it out anyway and was not entirely disappointed.  There were some nice flowers blooming and a lovely little fountain that was the centerpiece of the garden design.

The stairs above led to an alley way with some sculptures. 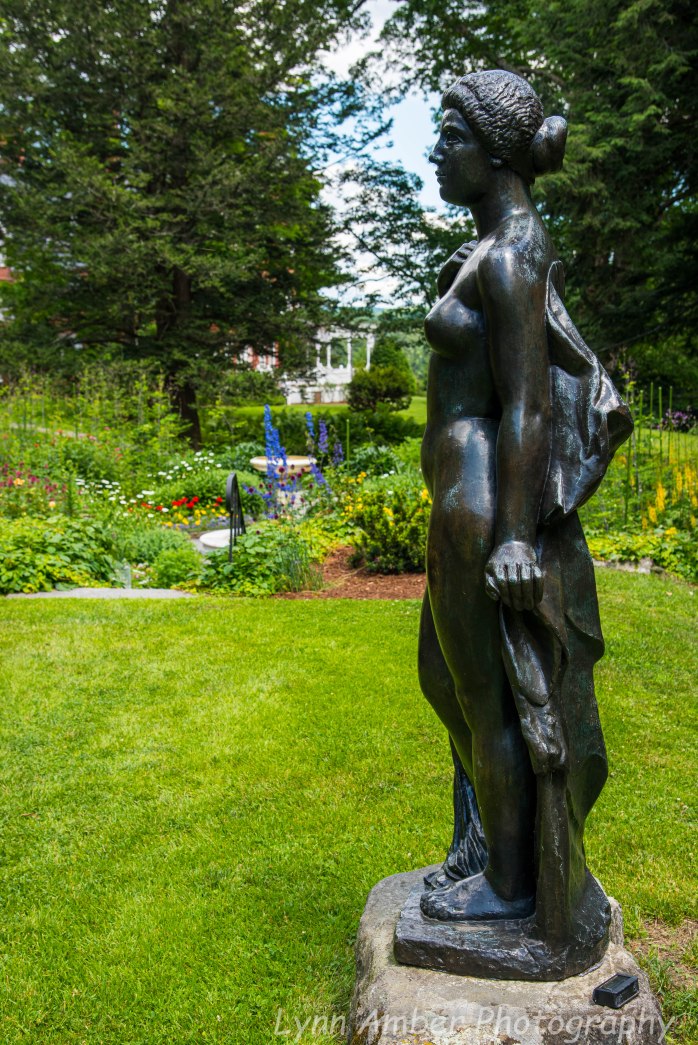 After exploring in and around the formal garden, I made my way to the lake via the carriage roads. It was a moderate uphill climb on a very well groomed gravel surface. Signage was abundant along the way where other trails and roads crossed. Since this area is groomed for cross-country skiing in the winter, the signs actually have Nordic trail difficulty ratings posted on them! I skied here many years ago when my boys were young.

The walk to the lake through the natural forest landscape was a stark contrast to the formal garden I had just visited.

I found some interesting objects along the carriage road.  On a short path off the road, I noticed this saying carved in wood along a small creek –  “Off the earth’s long contour, her river-veins” – and was curious where it originated.  It’s from the poem Antaeus, by Seamus Heaney.  Look it up and read the entire poem – I challenge you!

At a trail junction, I found this rock with a fountain of water bubbling out.  What do you suppose it is for?   It seemed quite unusual!  A watering trough perhaps for animals? 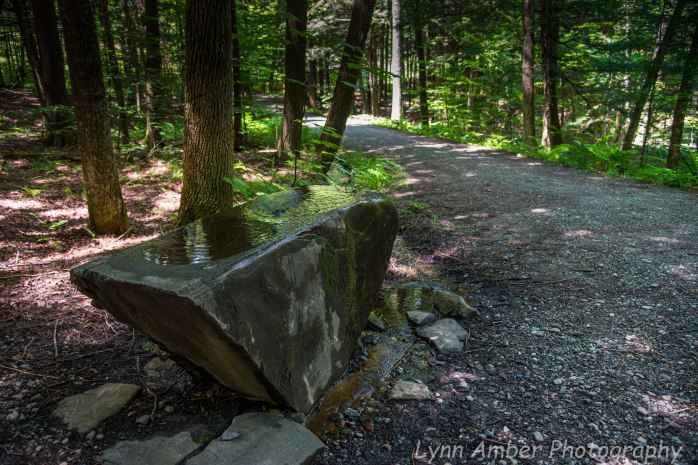 I found the architecture of the buildings intriguing. The original Federal-style house has undergone renovations with each owner.  The mansion was closed to tours but I walked up onto the porch just to get a feel for what it must have been like to live here and sit upon this impressive porch.  It was the detail in the woodwork that attracted me.

The most interesting building for me was The Belvedere Complex. It consists of a greenhouse and garden shed, a bowling alley and a outdoor swimming pool. The architecture reminds me of a Swiss chalet. I read that Rockefeller actually had a fall-out shelter built underneath the building during the cold war. When things open up again, I would love to go on a tour of this complex! 🙂

Great day exploring this national historic site and it only took me 20 years to get here!  I will definitely return when the buildings open up so that I can go on a tour of the mansion and the Belvedere.   The Billings Farm and Museum hosts an annual quilt exhibition which I have also always been meaning to attend! It looks like it is scheduled to start on July 18th and run through the 31st.  Guess I’ll be making another trip to the park!!