Posted on March 19, 2020 by lynnsreversegapyear

Since I’m so far behind on my blog posts, I decided to alter my plan and post some more recent adventures interspersed with the earlier travels this winter. I’m so excited about the area we are exploring right now that I cannot wait to write about it and share my photos.  Between my computer crashing and our days camped without service, it’s been a challenge to keep current!

At the moment, we are located along the historic Apache Trail in Arizona. We found a comfortable spot in a national forest service campground that is quiet and beautiful!  We are in Tortilla Campground in Tortilla Flats, Arizona.  The campground is operated by several volunteer hosts and each site has water and sewer hook-ups along with a fire pit and picnic table.  The sites are very generously sized and beautifully maintained by the friendly hosts.  With a senior discount, we are paying the large sum of $10 per night.

As the name suggests, the Apache Trail originated as a migratory route for Native Americans from their winter camps in the low lying desert to their summer homes in the higher elevations of the central mountains of Arizona. Original inhabitants were the Salado, a name given to this Native American group by archaeologists. The name is adapted from the Spanish name Rio Salado – or Salt River – which is the river flowing through the Tonto Basin. The Salado were cliff dwellers and some of their dwellings are now preserved at the Tonto National Monument along the Apache Trail. They occupied the area somewhere between 700 C.E. and 1450 C.E. and were farmers, hunters and gatherers. Their migration from the area is thought to have happened due to changing climate conditions making life along the once lush basin more difficult as droughts became more common. It remains a mystery what happened to them after they left the area. I learned the above information from the national monument website. Please take a look at their page – interesting reading. I was hoping to travel to the monument after we leave the western part of the Apache Trail however I just read that they have closed the facility until further notice due to the coronavirus.

According to the historical account on the website of the Apache Junction Public Library, when the white man settled the area and established Fort McDowell, things began to change. Of course! Local native American tribes such as the Apache and Yavapais conflicted with the U.S. military occupation and, eventually, lost the battle for the area when Geronimo surrendered in 1886. With the increasing settler population, the Tonto Basin and Salt River became an area of interest for construction of a dam that would serve as a water supply and flood control for the communities of Mesa and surrounding area. In the early 1900’s, construction commenced on the Roosevelt dam which included a more accessible road from the valley to reach the dam. It was called the Tonto Wagon Road and, after the dam was complete, the road became a popular tourist attraction. Called the Apache Trail today, the route extends along Rt. 88 from Apache Junction through the Tonto Basin to east of Miami, Arizona. That concludes my very shortened version of the history of the road!

It is reported to be one of the most scenic routes in Arizona and is popular with motorcycle enthusiasts and automobile day-trippers. The road is steep and winding with drop-offs not protected with guardrails. Driving the Airstream up the 15 miles of road to the campground was slow-going but fairly safe. The road is paved for 9 miles past the Tortilla National Forest campground. I’m not sure I would want to navigate the road with a much bigger rig, however!

At the moment, due to flood damage, the section of the road from Fish Creek Hill through Fish Creek Canyon is closed. So, it is not possible to travel the entire distance until the road is repaired.

We have explored the road from Apache Junction to the Fish Creek Hill rest area and I can personally attest to beauty of the scenery along the trail. It is one of the most scenic roads I’ve traveled. According to the National Park Service website:

“The Tonto Basin is a large inter-mountain basin rich in natural resources. The broad valley floor and steep mountains contain several different micro-environments, producing a wide range of resources within a small geographic area. Thick stands of mesquite, walnut, and sycamore grow near water. Saguaro, cholla, prickly pear, jojoba, and other species that produce edible buds and fruits grow on the slopes and mesas. At higher elevations, the pinyon-juniper belt is rich in game and edible fruits and nuts.”

The diversity of this area will blow your mind away. During our explorations, I have seen a wide range of plant material and wildlife and witnessed the unique and varied geology of the area – from valley floors to steep canyon walls. The Sonoran desert here is greening up with recent rains and plants are starting to bloom.

In the few days that we have camped along the trail, we have done some hiking and canoeing. We have also just chilled out around the campfire and enjoyed a great visit with Mike and Amy – some old boy-scout parent friends from Vermont – who were traveling through the area.

I hope you enjoy the following inspirational photo journey through the Tonto National Forest and the Superstition Wilderness!!

Our first full day in the national forest, we thought we might canoe on Canyon Lake.  It is just 2 miles down the road from the campground and we have not had the canoe off the truck since we left Vermont!  We went down to the lake to scope things out but were quickly discouraged by the crowds.  It was Sunday and the lake was teeming with boats and people.  As we drove around to the different boat launch areas looking for a spot to put the canoe in,  we decided that we did not want to canoe in a crowd!   Before we headed back to the campground to re-assess our day, I was able to capture some birds enjoying the day in and around Canyon Lake.

After abandoning the canoe idea, we went back to the campground and decided to go in search of firewood so we could have a campfire that night.  We asked the camp hosts and found out that you are allowed to scavenge for dead wood along the wash below the campground.

After getting some wood for the night’s campfire, we decided to drive up the road and find a place to take a short hike and get some exercise.

Our first hike in the area was on what is called the Mesquite Flat and it was a short walk on an old, unimproved dirt road.  The route took us into a canyon and dead-ended at a washed out bridge that spanned the canyon.  Perhaps this was an old mining road or an access road to a long-ago ranch??  It was a 3-mile round-trip hike and there were many interesting plants along the way.

At the end of the day, our Vermont friends, Mike and Amy, arrived and set up their tent on our site.  We enjoyed a great campfire and some good conversation and, while cooking dinner, we were treated to a magnificent sunset.

The next day, we headed off to canoe Canyon Lake.  It was Monday and we thought things would have cleared out on the lake.  We were wrong.  Due to the coronavirus, Phoenix areas schools are closed and so there were still many families enjoying the outdoors and day off.   We decided to put the boat in anyway and deal with it!  We launched at the Acacia Recreation Area and headed straight across the lake for the finger of water that headed upstream into the canyon.

As we headed into the narrow section of the lake, the scenery was breathtaking with the sheer canyon walls and steep, sloping areas covered in thick vegetation.  We even saw some Big Horn Sheep up looking up into one of the narrow canyons.

There is a substantial commercial operation at Canyon Lake that includes a restaurant, campground, gift store and, of course, boat tours!!  The Dolly is a replica paddle-wheel boat that takes people up into the lake.  I’m not sure it is an authentic paddle-wheel but I did just hear today that it may be suspending operation due to the coronavirus.

We found a nice spot to pull over and eat some lunch before heading back to the launch site.

While we were canoeing, Amy and Mike embraced my recommendation to take the drive past the campground to the Fish Creek Hill rest area and do some short hikes along the way.  They said it was awesome and that there were many flowers blooming along the Tortilla Trail.  They left the following morning to rendezvous with relatives in Tucson, so Jim and I decided to follow in their footsteps and hike the Tortilla Trail since they gave it such rave reviews.

The Tortilla Trailhead starts just a mile from where the road ends on this side of the Apache Trail.  There is an alternate starting point on the other side of the basin.  It is about 3.2 miles to hike to the other trailhead from where we started – making it a 6.5-mile roundtrip hike.  We only went about 2 miles and turned around given the time of day and the fact that we also wanted to continue to the Fish Creek Hill rest area after the hike and see that canyon.   The Tortilla Trail traverses an old road that is supposedly open to 4WD vehicles.  It is very rough – and seems more like a very wide hiking trail.  We certainly did not see any 4WD vehicles – or any other people for that matter!!  I’ve seen some pretty amazing territory over the years and the scenery along here was mind-boggling!!  My focus on this hike was photographing flowers so I had my macro-lens on – but I still got some landscape shots with it as well.

I tried to capture some of the amazing scenery along the trail with my 105mm lens – here goes! 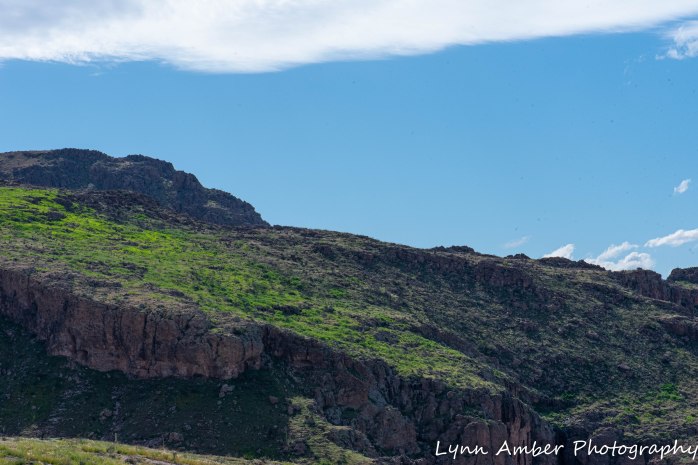 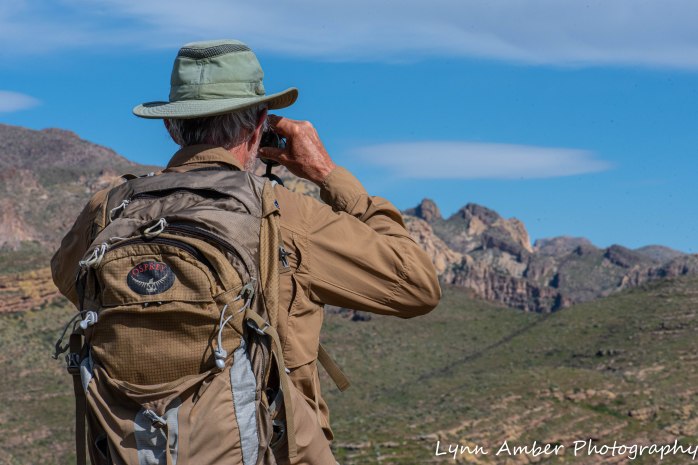 More plants along the way…..

We left the Tortilla Trail and followed the dirt road up to the Fish Creek Hill rest area – the end of the line for this section of the Apache Trail.   There is a paved, accessible walkway here with a dirt trail extension that overlooks the canyon. 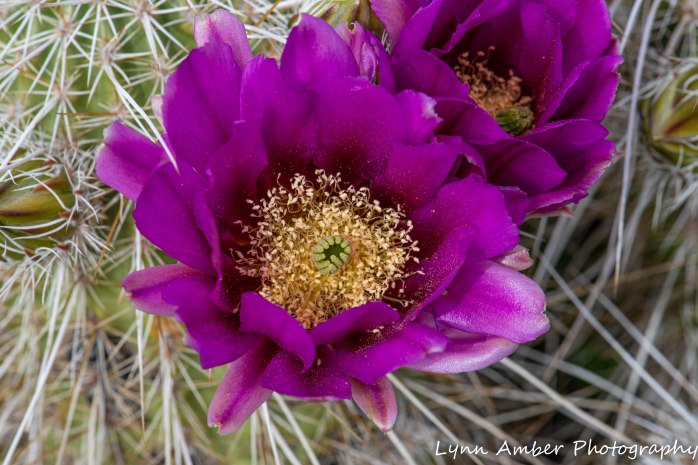 A relaxing, beautiful sunny day in the Tonto National Forest ended with a perfect campfire and another  gorgeous sunset.  Jim is known for his talent with a campfire.  He never disappoints!! 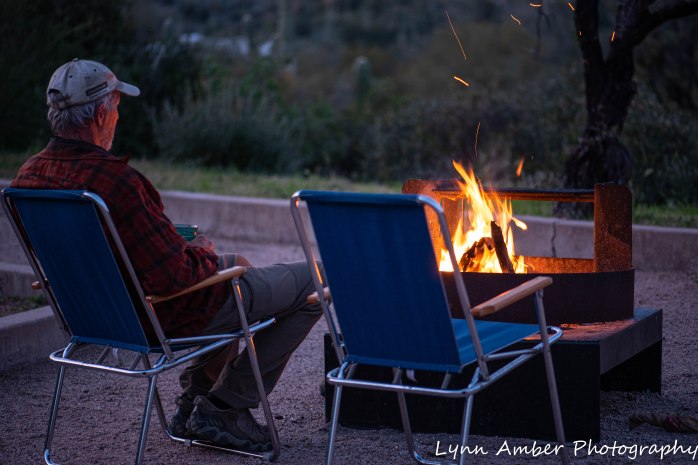 3 Comments on “The Apache Trail”