In Search of Acadia’s Public Gardens

Posted on June 14, 2018 by lynnsreversegapyear 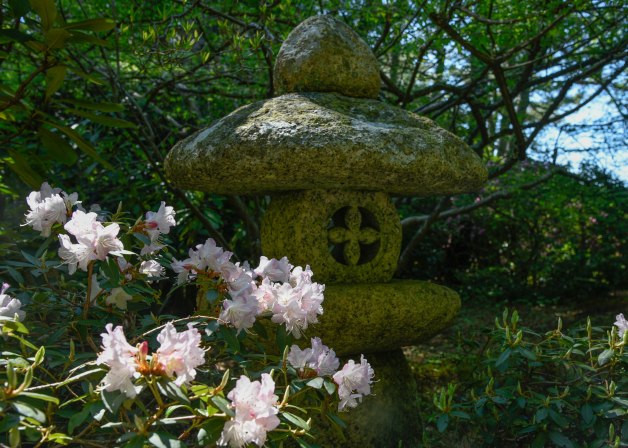 Wherever I travel, I am drawn to seeking out public botanical gardens much like a hummingbird is attracted to Monarda or Lupinus or Aquilegia.  Just as the hummingbird gets its nourishment from these flowers, visiting gardens and walking in nature sustains me.  My love of gardening and the art of landscape design has its foundation in my early life as a resident at Longwood Gardens.  I treasure my childhood spent wandering around this phenomenal garden created by Pierre S. DuPont.  Living at Longwood instilled in me a love of plants and the natural world that remains a guiding force in my life.  (Ask Jim how many times I stop while hiking to admire and snap photos of plants discovered along the trail!)

I am close to three public gardens here on Mount Desert Island and made it a priority to visit them before the hoards of summer tourists descend upon the island.  On one of my first days off, I traveled the short distance to the Asticou Azalea Garden and the Thuya Garden.  Both gardens are free while a suggested donation of $2 is appreciated. The third garden I really want to experience is the Abby Aldrich Rockefeller Garden – on the grounds of the former estate, The Eyrie, of John D. Rockefeller, Jr.   This garden is not as accessible to the public and requires reservations as it is only open for a limited amount of time during the summer months.  So, I will be looking to reserve a spot to tour this garden later in the summer when at its peak.

I grabbed a brochure at the entrance to the Asticou Azalea Garden and, in that publication, learned about the Mount Desert Land & Garden Preserve.  This foundation was established by John D. Rockfeller’s son, David and his wife Peggy as a means of preserving gardens and the natural landscape in the Seal Harbor area.   At present, the preserve manages over 1,100 acres including the three gardens mentioned above.  In addition, there are carriage roads and hiking trails throughout the preserve which borders Acacia National Park.  For more information about the preserve, visit the website.

The next revelation was the discovery that both the Asitcou Azalea Garden and the Thuya Garden were created with plants secured from the former Bar Harbor garden of landscape architect Beatrix Farrand.  She was an early female pioneer in the landscape architecture movement back in the time period of the great country estates.  It is no secret that her initial success was due in large part to her well-connected social status.  While she had no formal college education, in 1893 through her prestigious social connections, she secured an apprenticeship with Charles Sprague Sargent, the director of the Arnold Arboretum at Harvard.  After an intensive year of study under his tutelage, she had the luxury of traveling throughout Europe studying garden design up close and personal.  In particular, her time spent at the Munstead Wood garden of Gertrude Jekyll appears to have influenced her later style with regard to flower borders.

Upon her return from Europe, she set up shop in her mother’s New York City home, and again through her influential society connections, acquired commissions from some affluent clients.   So, while it has been stated that her success was due largely to her social prominence, she clearly had the talent and drive to sustain her career and gain admiration.  From 1891 through the 1940’s, she designed gardens for both private and public entities – including work done at both Princeton University and Yale.  She served as a role model for women endeavoring to enter the field of landscape architecture and will certainly be remembered for her perseverance and achievement in a male dominated profession.  Her connection to Mount Desert Island was largely due to the summer family estate on Reef Point that she inherited from her mother.

I remembered Beatrix Farrand’s name from my time spent studying landscape design at Temple University’s Ambler campus.  The school was originally founded in 1910 by Jane Bowne Haines as the Pennsylvania School of Horticulture for Women.  Beatrix Farrand was commissioned in 1931 to create a design plan for the college.  I spent countless hours enjoying and studying the prominent English-style perennial border she developed for the school.  I graduated with Summa Cum Laude honors from Temple with a degree in Landscape Design in 1987.  My most memorable experience at Ambler was having a design I developed for a class on naturalistic planting techniques used for the school’s exhibit at the Philadelphia Flower Show!   I can remember standing in the crowd looking at the exhibit with my pen and ink hand-drawn design on display, feeling very accomplished and proud!

Returning to the present day, I checked out some books about Beatrix Farrand from the Jesup Memorial Library in Bar Harbor, and enjoyed refreshing my memory with regards to her life and work.

I hope you enjoy some of the photograph’s I’ve taken during my visit at the Asticou Azalea Garden and the Thuya Garden, both created with a foundation of plants from the former gardens of Beatrix Farrand.

Located in Asticou, between Seal Harbor and Northeast Harbor, the Asticou Azalea Garden was designed by landscape architect Charles Savage with Japanese-style plantings and hardscapes.   He secured the acquisition of many plants from Beatrix Farrand’s Reef Point garden when she sold her property in 1956, and incorporated these plants into the plan for this garden.  While small in acreage, the garden provides quiet spots for reflection and solitude. 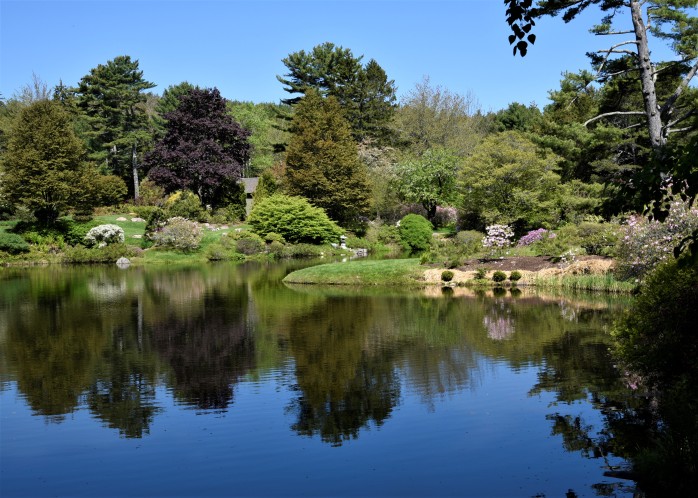 Strolling through the garden, there are hidden gems like the above sculpture just waiting to be discovered!  And walking around the pond pathway, views are framed with lush plantings of both native and non-native plants.  I enjoyed recognizing some of the plants I remember from my landscape design days in Pennsylvania!

This property was once belonged to Boston-based landscape architect Joseph H. Curtis as his summer home.  After his death, his friend Charles Savage accepted the responsibility of caretaker for the property.  After working on the design for the Asticou Azalea Garden, he began work on designing the Thuya Garden and it officially opened to the public in 1962.  Again, he used plants from Beatrix Farrand’s garden.  When I visited, the large perennial borders were still more or less in dormancy.  There was a gardener’s cart with a hand-drawn planting plan spread out on it – in between the two large borders.  Obviously, it was planting time!  This garden is designed to be at its best in July through September.  I will be making a return trip later in the summer in order to enjoy the garden in all its glory.

For this trip, since there was not much in bloom, I focused on the architecture in the garden – a very simple combination of wood structures embellished with details I found delightful!

Since there was not much in bloom, and after admiring the rustic garden embellishments, I noticed that there are hiking trails that leave from the garden and into the preserve.  I decided to take “the paths less traveled” and climb to the top of Eliot Mountain.  Along the way, I discovered some memorials to those who called Mount Desert Island home, and were instrumental in preserving the land here. 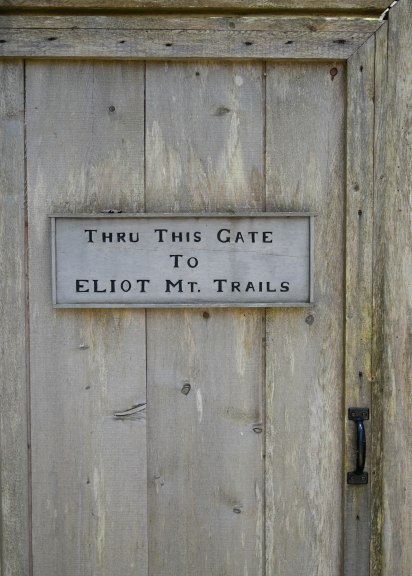 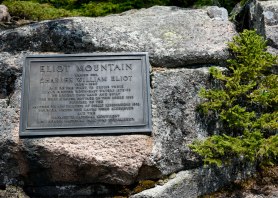 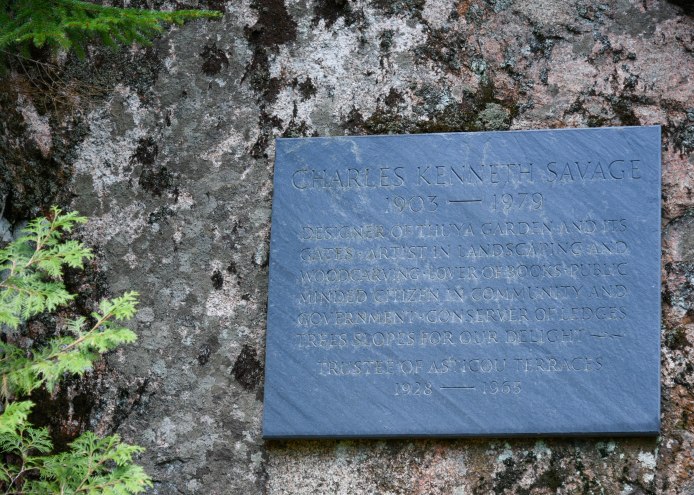 The trails in the preserve are maintained very minimally, and less traveled.  I never saw another human being through the entire hike up to Eliot Mountain.  If you are looking to avoid the crowded Acadia NP trails, consider spending some time in the Land and Garden Preserve.

On my way back through the Thuya Garden after my hike, descending the steep Asticou Terrace entrance to the garden, I took the time to capture the view towards Northeast Harbor.  And, came upon a little creature, all tucked up against a rock waiting for mama.

I cannot wait to revisit Thuya Garden later in the summer and see the perennial borders in full bloom.   Thankful to these affluent landowners for donating their properties for the benefit of all.  🙂

4 Comments on “In Search of Acadia’s Public Gardens”