Path of Totality in the Tetons

Posted on July 13, 2017 by lynnsreversegapyear

Oh my! Time flies so fast!  It’s already almost mid-July and there’s so much that we have done since the last time I posted.  While riding bikes today along the Pilgrim Creek area of the park, I was thinking about the theme for my next posting.  It seemed appropriate to devote at least one post to the event of the summer – the total solar eclipse.  While my text will be focused on the eclipse, I’ll embellish the posting with some pictures of our adventures over the past two weeks. 🙂

Heading back to Jenny Lake along the bike trail – can’t beat that view! 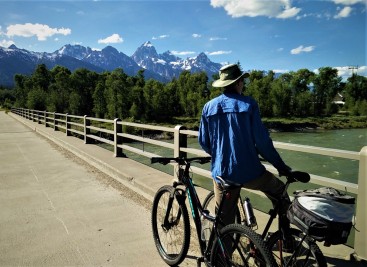 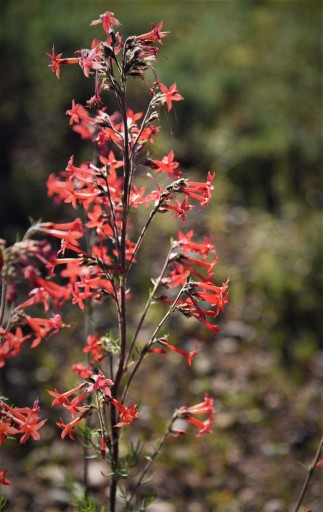 By pure happenstance, Jim and I are positioned to be in one of the best places in the U.S. for viewing the total solar eclipse this summer on August 21st.  A chance encounter with some fellow workampers along Interstate 10 in Arizona over the winter brought us to the Tetons this summer –  when they encouraged us to apply for a job opening here, and we took them up on it.

I did not realize at the time that we were going to be in a prime spot to view the eclipse.  My sister-in-law, who owns a house in Driggs, ID, clued me in to this while we were back in Vermont for a couple of months in early spring.  She said she briefly considered renting out her house in Driggs to astronomy lovers who will be descending en masse to the area in August.  Apparently, rental prices will be through the roof!

Wildflowers along the trail at Two Oceans Lake

An incredible field of geraniums at Two Oceans Lake 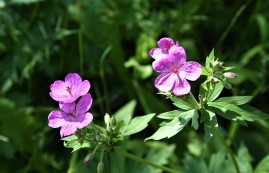 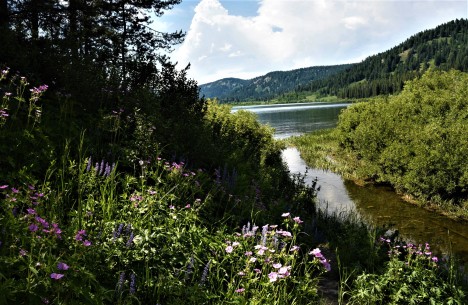 Looking towards Two Ocean Lake from the spillway 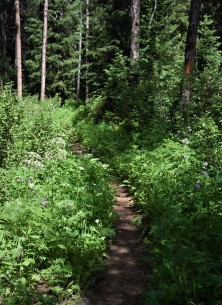 West side of Two Oceans Lake trail – the mosquitoes were brutal!

We were only on the job a couple of days when we were informed to expect to have record-breaking crowds in the park.  I have no doubt this will be true.  What an exciting place this will be come August!  I am totally thrilled that we landed here this particular year.  Just dumb luck!

We’ve just started to sell the special “solar glasses” (meant to be worn when witnessing the eclipse) in the Jenny Lake Store, and I did some research so I could be prepared to answer questions about the epic event.  So far, I’ve fielded questions like:  What is a total eclipse? And why are you selling these glasses here? 🙂

I’m surprised by the number of people who don’t realize the event is even happening.  I learned that the Town of Jackson has an entire website devoted to this spectacular occasion – Teton Eclipse.  Check it out!

So, just what is a total solar eclipse??  For a brief two minutes on August 21st, the moon will cross in front of the sun at mid-day in our location – causing total darkness  for those in the path of totality.  And, folks, that means us here in Jackson and the surrounding area!!  The path of totality is a 60-mile wide shadow that defines the best viewing of the phenomenon  – and it crosses the contiguous U.S. roughly from the coast of South Carolina to the coast of Northern Oregon.  The National Aeronautics and Space Administration has a great map showing the path of totality across the country.  Look to see if you are within it!! And if not, where you can go to view it best!  I’m happy to see that my brother’s location in Charleston, SC is also within the path of totality.

Those lucky folks who live in Hopkinsville, Kentucky are the closest population center to the absolute prime spot for the eclipse – where the sun will be blocked for the longest period of time  –  which will be just 12 miles north of town and will traverse through Giant City State Park in Illinois and right by the Blue Sky Vineyard!  Now, that would be a great place to spend the day!  I wonder if they are Harvest Host members 😊 Ha! Ha!

NASA also has a link to NOAA’s information about weather conditions during the eclipse so people can be aware of up to date environmental viewing conditions.  Check out NASA’s complete eclipse website for all kinds of activities and scientific information about this phenomenal happening.

I’m just glad to find myself in one of the best places to view the eclipse, and even though we are scheduled to work that day, we’ve received official word that our company is allowing us to close down the store just prior to the eclipse so we can go outside and enjoy the spectacle.  And with our Jenny Lake location, we are just a mere 8 miles north of the center of the path of totality – which runs through the Gros Ventre Campground, along the Kelly Road and through Moose Junction.  The absolute center of the path runs right through the Jackson Hole Airport.

According to Jackson astronomer Ryan Hennessy (quote taken from an article in JHStyle Magazine), this is what to expect.  “You’re probably going to see the most spectacular sight in nature.  You’re seeing the sky go from day to night.”  He says that many of the brightest stars will appear, and in particular Mars and Venus will be visible, temperatures will drop slightly, animals will become confused, and the light will take on an eerie glow.

How lucky am I feeling?   VERY LUCKY!  I hope everyone is making plans to enjoy the eclipse at your locale!!  Keeping my fingers crossed for clear skies that day!!  While we wait for August, we will continue to explore this unique area.  Below are more examples of the sights and sounds of Jackson Hole and the Grand Tetons……. 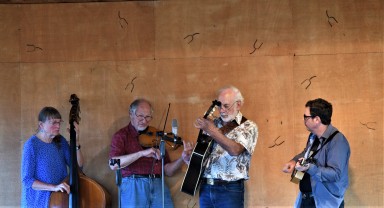 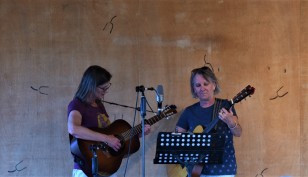 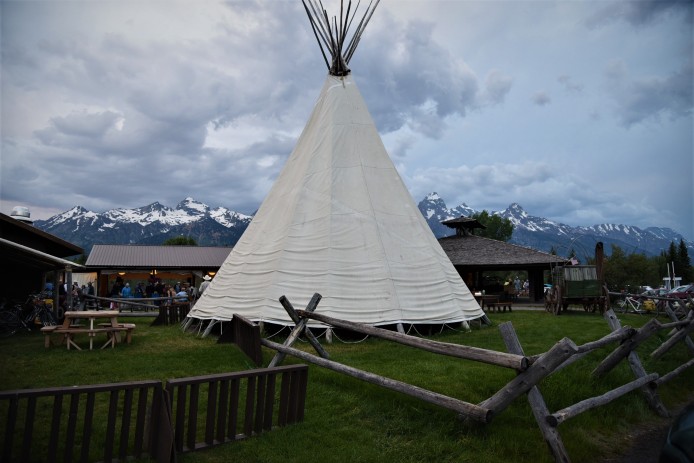 On July 3rd, we attended the weekly Monday Night Jackson Hole Hootenanny at Moose Junction – great opportunity for local artists (and those just wandering through the area) to perform!

Jim wandering around in the stream bed

Love the view back from the end of the road

Today, July 12th, we rode bikes from Colter Bay along Pilgrim Creek Road and then, stopped by Leek’s Marina to enjoy the lake views.

Enjoyed the pace of this out-of-the-way marina 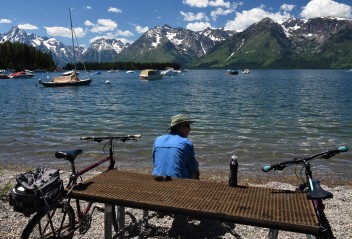 Could have sat here all day!!

Returning to Colter Bay mid-afternoon, we rested up before embarking on an early evening kayak on Jackson Lake. 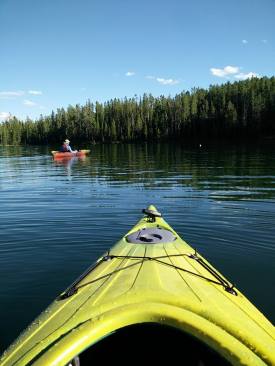 ← Flora and Fauna – Spring in the Tetons
Food for Thought →