Flora and Fauna – Spring in the Tetons

Posted on June 23, 2017 by lynnsreversegapyear

The Teton Valley is a remarkable natural environment created by forces of nature spanning millions of years.  The Teton Fault accounts for the formation of the Teton range as movement along this fault caused the dramatic uplift of the mountain range.  Even today, there are estimated to be many small, unnoticeable earthquakes per year.  There is a great website that outlines recent earthquake activity in the greater area surrounding the Tetons.  So, the fault is definitely still active and the potential for a major earthquake here does exist!  I’ve heard some predict that this will be the year.  I hope not while we’re here!

After the mountains were formed, glacial action sculpted the valley and mountains even further.  The last glacial impact happened between 50,000 and 14,000 years ago – fairly recent by earth standards.  In their wake, the glaciers left behind depressions and rocky moraines that contributed to the formation of the beautiful natural lakes such as Phelps, Taggart, Jenny, Jackson and others.  The Snake River flows between some of these moraines which are visible from a number of overlooks throughout the park.  One area of the park called The Potholes is indicative of how the glaciers impacted the terrain – leaving large “pothole” depressions in the sagebrush flats.  The glaciers carved out U-shaped canyons in the Teton Range as well – such as Cascade and Paintbrush Canyon.  There are still a number of small glaciers  within the park.  Mount Moran has two small glaciers that continue to sculpt the mountain – Skillet and Falling Ice.  On the Grand Teton, the Teton Glacier is still flowing down the northern flank of the mountain.  There is an interesting article on some scientific research that is being conducted on these glaciers and the impact of climate change on the park.

Over time, the Snake River flowing through this valley continues to form terraces and benches as it meanders down through the sagebrush flats.  Between the river, the mountains and the high-desert flats, the area is rich with a diversity of ecosystems fostering an interesting mix of plant and animal life.

When we first arrived in the Tetons, there was plenty of snow in the mountains (and there still is!).  Most of the higher elevation trails were snow-covered but valley trails were open and passable.  We started hiking some of these lower trails so we could get our hiking legs back, and I was surprised to see so many flowers and shrubs already starting to bloom. 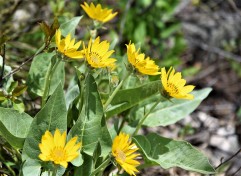 One of the early flowers to bloom here in the park, and very prevalent, is the Arrowleaf Balsamroot.  It forms very showy clumps throughout the park – often entire fields of zflowers are evident.  This plant has useful medicinal properties and was traditiionally used by Native Americans for pain relief, as well as a remedy for  treating colds, burns, wounds, and insect bites. 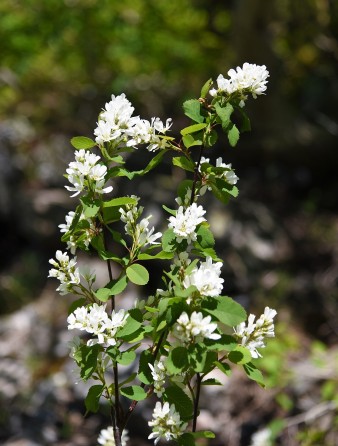 The Western Amelanchier is by far one of the prettiest examples of serviceberry that I have ever seen.  Here in the park, the shrubs form small, dense clumps with startling white flowers in the spring.  There are several eastern varieties of Amelanchier and it has always been one of my favorite native plants.  I have to admit that I have never seen it bloom as impressively as I have here in the Tetons.

This Ballhead Waterleaf was a plant I found along the Taggart Lake Trail.  The flowers were held underneath the leaves making it hard to even notice them.  I’ve never seen this plant before so it was a thrill to find it and identify it!  I was fascinated to learn that all parts of the plant are edible – especially tasty are the tender young leaves which apparently have a sweet carrot-like taste. 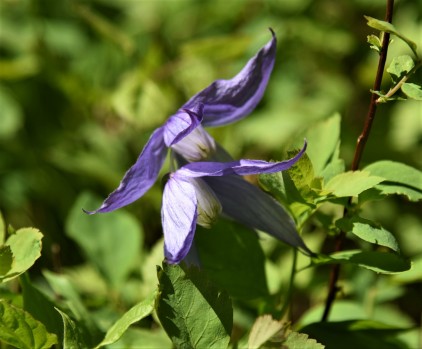 Rock Clematis grows along many of the trails in the park.  I first noticed it on the Paintbrush Canyon trail and then again on the Cascade Canyon trail.  It prefers the shade of the forest.  Clematis has always been one of my favorite garden vines and to find a variety growing in the wild was pure delight! 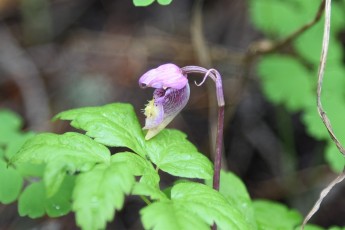 I was lucky to even spot this lovely little orchid growing in the shaded forest on the Paintbrush Canyon trail.  I searched for more than this one specimen but could not find any other plants.  The other common name for this orchid  is Fairyslipper – how fitting!

Ever since we’ve heard about the wild huckleberry plant that is native to this region, we’ve been trying to identify it in the wild.   We have oodles of merchandise for sale in our store that has the native huckleberry as a major ingredient –  including honey, syrup, all manner of  candy to non-edibles such as hand cream, soap and huckleberry chapstick.  The plant is closely related to blueberries and it’s not hard to see the resemblance in the flowers and plant structure.  It’s no surprise that huckleberries are a favorite food of the bears in the park.  I can imagine them feasting on the hillsides covered with this delectable berry. 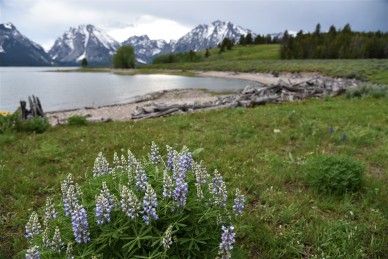 The Silver Lupine is a less showy plant than other cultivated lupines that I’m used to on the east coast, but it has a very subtle beauty that makes it a striking plant whether by itself or combined with other blooming wildflowers such as the Indian Paintbrush.  I’ve seen it growing almost everywhere in the park – from the sagebrush flats to more open areas in the Lodgepole Pine forests.

Sticky Geranium is growing with abundance in many areas of the park.  I love geraniums and it was obvious to me this was a type of geranium but, since I’m not familiar with native plants in this region, I had consult some plant books to nail down the exact species.  I understand that this plant is an important food source for both deer and elk in late spring and early summer. 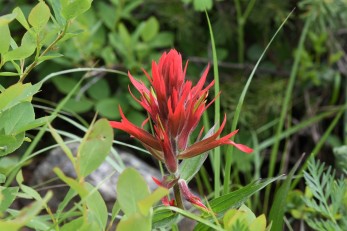 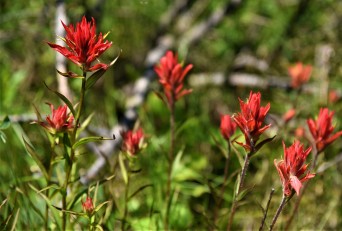 I’ve encountered Indian Paintbrush species all over the United States, and the Teton Valley boasts a number of different varieties.  I’m guessing that the ones I have photographed are Castilleja miniata – but I’m not going to swear by that!   No matter what the species, these plants provide colorful splashes of red throughout the moist meadows of the park.

Not to be confused with Arrowleaf Balsamroot,  several species of Arnica’s are blooming in the park about the same time but the habit and leaf of the plants are different.  I hope I’ve got this right!  I’ve been examining these plants for a couple of weeks now! Balsamroot, from my observation is a larger, more clump-forming plant with leaves that resemble an arrow.  The Heartleaf Arnica is smaller, with a leaf roughly the shape of a heart and does not grow in large clumps but is more rhizomatous in nature.  Arnica plants are well-known for their medicinal properties – used externally for swelling, cuts and bruises.  In the park, they are a food source for mule deer and elk.

Pronghorn are one of the most interesting animals!  Everyday on our drive to work, we pass by the sagebrush flats where the pronghorn love to roam.  Usually they are not near the road, and we view them from a distance.  The one above happened to be close enough to the road that I could snag a photo with my telephoto.   Pronghorns are related to  goats and antelopes and are ungulates (hoofed animals).   They can top speeds of 60 miles an hour making them the fastest land animal in North America.

Moose are a common sight in the park, especially in the wetter meadows and lakes.  We have seen quite a few at a distance, and a young one quite close at Moose Pond near Jenny Lake.  I was amazed to learn that moose will dive quite deep in search of food at the bottom of a lake or stream.   One thing to be aware of – moose can be more dangerous than bears.  I’ve heard stories about the dangers of getting too close to a cow with young ones or a bull moose with an attitude!

We have seen numerous marmots while hiking on the trails in the park – on the Bradley Lake trail, on the String Lake trail and today, on the Cascade Canyon trail.  They are not too shy and love to pose for photos.  Let’s face it – they are rodents.  They earned the nickname “whistle pigs” due to their loud scream used to sound an alarm.  These animals are not high on the food chain and are preyed upon by coyotes, grizzlies, and golden eagles.

The biggest thrill of all came one evening on our way home from work.  We happened upon an area near Pilgrim Creek that has been frequented this spring by a sow and her cubs at the precise moment when she was nearing the road, and wanting to cross.  We had seen her and her cubs from a distance several times but this was really up close and personal.  Park biologists believe that she may be staying close to the road in an effort to protect her cubs from aggressive boars (male bears)  in the area.

We recently spent some time on the water canoeing around the small islands in Jackson Lake off the shore from Colter Bay.  We watched the Common Mergansers above for quite a while in a protected cove south of Colter Bay.  While we were sitting there, we also saw several Great Blue Herons and a Bald Eagle fly over!  I’m hoping to improve my knowledge of birds this summer so look for more bird photos as I investigate their habitats.  In particular, I’m on the hunt for the elusive Trumpeter Swan and Sandhill Cranes.  I have seen some American Pelicans – but not close enough for a photo.

So, lots coming to life here in the Tetons this spring – which just officially became SUMMER! 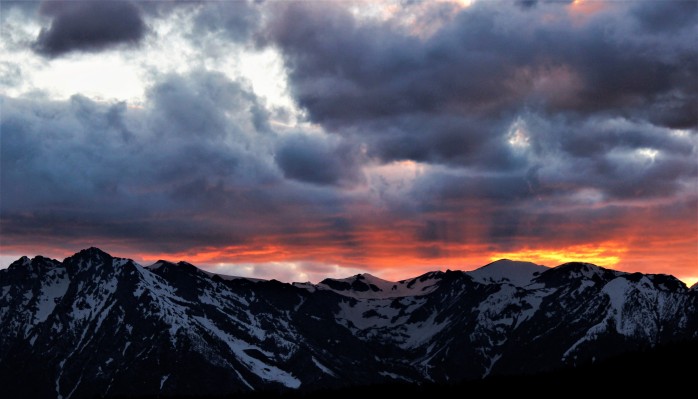 ← Land and “Sea” Adventures
Path of Totality in the Tetons →

2 Comments on “Flora and Fauna – Spring in the Tetons”