The Bohemian Town of Terlingua

Posted on January 30, 2017 by lynnsreversegapyear

After a light rain

I promised some poetry, didn’t I??  I have always been somewhat intimidated by poetry.  I’m not sure why.  But, I am confessing this unease here and now.  I think it all started in high school.  I wanted to enjoy reading poetry simply for its own sake.  I was not interested in analyzing it, or sharing my thoughts with anyone else.  For me, that took all the fun out of reading poetry.  And, I always worried that my interpretation was not the correct one, or the norm.    I just wanted to enjoy the cadence, the choice of words and the imagery that it evoked for me.  Hence, I sort of shied away from poetry.

When I was frantically searching for an electrical outlet where I could plug in my laptop in Big Bend, I found one in the gift shop at the Chisos Lodge – by that hard, wooden bench I mentioned in my last post!  Clearly, there was an effort to discourage anyone from hanging out there long-term to use the internet and charge up!  Anyway, on that very wooden bench, I noticed several copies of a free publication entitled Cenizo Journal.  In their own words, “Cenizo Journal is a quarterly journal dedicated to chronicling the history and people of Far West Texas through the work of writers, artists, poets and photographers.”   I was absolutely delighted to discover this little gem.  I took a copy back to the trailer and read it cover to cover, including all the advertisements.  I think I was feeling somewhat culture-deprived!  The best part for me was also discovering that the journal is named for a plant common in this region – Leucophyllum frutescens – Texas Sage or Cenizo.

There is a point to all this rambling, I promise!  What really caught my eye in this journal was the section devoted to “Cowboy Poetry”.   Cowboy Poetry??!!  For some reason, it brought back images of my lifelong aversion to poetry, and I thought to myself, “Well, if cowboys can appreciate and write poetry, then so can I!”  So, I will be experimenting with poetry – reader beware!   It’s my new challenge to myself.  I thought I would start out simple – with Haiku – as it will give me some structure, and it’s short!!

Creosote bush quite simply dominates the desert landscape here in Big Bend.  I had read that after a rain, the distinctive scent of the creosote bush permeates the air.  Three years ago, when we were here, it never rained.  But, on this visit, we had a very light rain early one morning.  As I stepped outside, the air was rich with the aroma of the creosote bush.  I was honored to be able to experience this desert phenomenon.  So, when contemplating my first poem, I gleaned my  inspiration for my first poem from what else –  a plant!

Okay, now on to the real theme of my post.  We left Big Bend National Park today, having used up our allotted 14-day limit for camping.  I’ve decided to compose several posts on our Big Bend adventure and do this in reverse chronology.  Just because today was such an unexpected pleasure that I wanted to write about that first!   Plus, it’s always good to shake things up a bit.

We landed at BJ’s RV Park in Terlingua this morning about 11am.  The only reason we are staying in an RV Park is because I wanted to visit the Starlight Theatre before leaving this part of Texas, and there are not many options for camping in Terlingua.  While it’s not the prettiest park I’ve stayed in, this is a little gem of an RV Park, for several reasons.

We got set up by 12:30pm.   I had devised a plan to visit the Starlight Theatre for Sunday Brunch, which runs from 11am – 2pm.   So, we were right on schedule since it was a short 1-mile drive to the heart of the Terlingua Ghost Town, home of the world-famous Starlight Theatre.  A Dartmouth College Library colleague, Jeremy, had mentioned the Starlight Theatre to me several years ago, when I planned and executed my first trip to Big Bend National Park.  He was adamant.  I recall him saying that it was not much to look at from the outside, but the food and atmosphere was worthy of consideration.

We never made it into Terlingua on that first trip.  So, it was one of the items at the top of my list this time around.  Now, we had a sort of “dry run” a week earlier, when we left the park in search of a place to watch the Green Bay vs. Atlanta football game. Not being familiar with the restaurant, I thought perhaps it had a bar with some wide-screen TV’s.   Jim and I arrived in Terlingua on that day, found the Starlight Theatre and realized that their Sunday Brunch had just ended and the restaurant was closed until dinnertime.  By the look of the crowd gathered outside, Jim pegged the place as a tourist-trap and immediately developed a somewhat negative attitude about it.  He dislikes participating in touristy attractions – finding them artificial and often over-rated.   I sensed that I was going to find it hard to convince him to go back.

I would not be deterred, however!  Subversively, I found the restaurant’s website and scoped out the lineup of entertainers for the coming week.  It turned out that the day we were leaving the park was a Sunday, and the musician who was playing for Sunday Brunch that day really piqued my interest.  I accessed his website, read his bio and was hooked.  I knew that Jim would also love this guy – so no need to do a hard sell to get him back to the Starlight Theatre.  I love it when it works out this way.

Michael Combs describes himself as a balladeer – a singer of “old new Mexican marchas, cutilios, cuadrillas chotises y polkas; old Texas Blues, Quebecois Reels & Jigs, Gospel & Honky-Tonk, Labor & Union Songs, Folk and Protest songs, a song of the Sea, an Appalachian murder ballad or a 500-year-old maiden’s lament — my repertoire is a Mile Wide and an inch deep.”    Read his Home page – it will make you grin  🙂 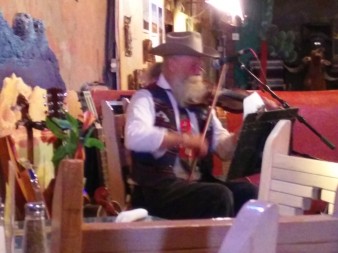 Switching to the good ole fiddle!

Pictures are a tad blurry – due to the limits of my cell phone camera in a dark restaurant!

We arrived for brunch, and I was happy to see that it was not crowded and we were escorted to a table near the music stage.  J. Michael Combs was already playing – and was singing a set of Mexican folk tunes.  We could tell that we were in for a real treat.   (I might add that this guy really  reminded us, in appearance, of our dear friend Bill back in Vermont!)

We ordered our brunch, and when the food arrived, we knew without a doubt we had made the right choice to come here.  All brunch entrees come with a side of fresh fruit, coffee and a delicious basket of *dessert donuts*.  They were heavenly!  I had the Terlingua Quiche with hash browns and a flour tortilla.  It was by far one of the best meals I have ever had.  I usually give Jim the hash browns when they come with a meal, but not this time!  Jim had a dish that consisted of corn tortillas, eggs, pico di gallo sauce and refried beans – can’t remember the official name but his was equally tasty. 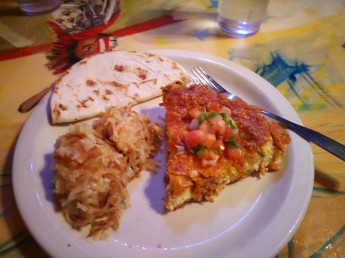 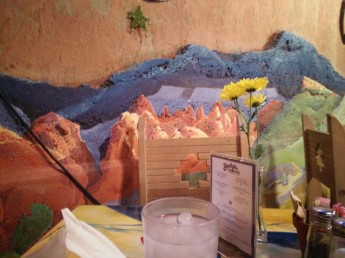 And to leisurely enjoy this meal while listening to some good music!  Delightful!  J. Michael Combs plays several instruments and we heard them all during our meal – the button accordion, fiddle, autoharp, guitar, and banjo.  What a treat!  He sort of reminded me of a cross between Woody Guthrie and Pete Seeger.  I  bought one of his CD’s and chatted with him briefly after brunch.  Turns out he knows a Vermont musician who he has played some Quebecois music with over the years.

After brunch, my only other wish was to visit the Terlingua Cemetery.  I have this thing for old cemeteries.  This cemetery dates back to the days when Terlingua was an old mining town.  Terlingua became a booming mining town with the discovery of the mineral cinnabar, from which mercury is extracted, in the late 1880’s.  By the 1940’s, however, demand for mercury had decreased compounded by the Great Depression a few years earlier.  This led to the decline of the industry and the town.  Now, Terlingua has enjoyed somewhat of a rebirth as a tourist town near Big Bend National Park and is home to a bohemian mix of locals, a few artists, writers and nature lovers.

I’ll let the pictures speak for themselves.  Truly, the most unique old cemetery I have ever visited. 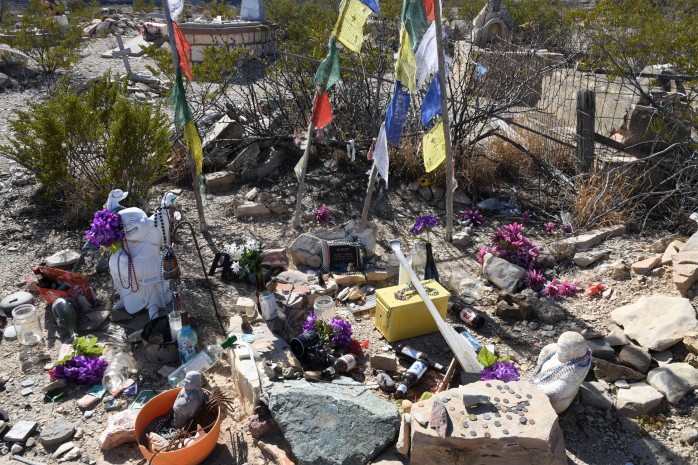 Every year on November 2, the town celebrates the annual Day of the Dead holiday.  A Dallas newspaper article from 2014 brings this celebration to life.

Wandering around this small town, we also came upon a charming little community garden and we just had to trek on down and check it out.  We had been wondering how on earth people gardened in the harsh landscape. 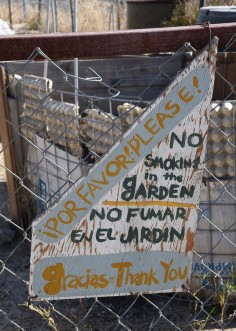 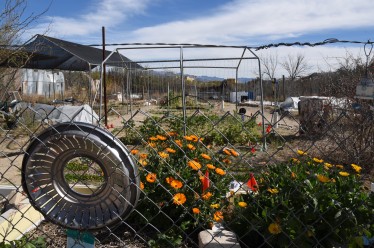 Before making our way back to the truck, we also visited the Terlingua Trading Post – a gift shop adjacent to the Starlight Theatre.  On *The Porch* outside the gift shop, an eclectic mix of local musicians had gathered for an informal, afternoon jam session.  I had read that this is a impromptu occurrence here and was thrilled that we happened upon it when we were visiting.  We hung out and listened to the music and storytelling for a spell.  Great way to end of day.

If you find yourself in the Far West of Texas, it’s worth a stop in Terlingua.  I highly recommend it.  Besides the Starlight Theatre, there are other eateries worthy of a mention:  the High Sierra Bar and Grill and The Kiva Bar.  And, there’s an awesome little grocery store called the Cottonwood Market in nearby Study Butte that will knock your socks off!

Random Acts of Art in Terlingua