The Big Bend – more than just a park

Posted on February 2, 2017 by lynnsreversegapyear

As the early morning light

Rests on the hillside. 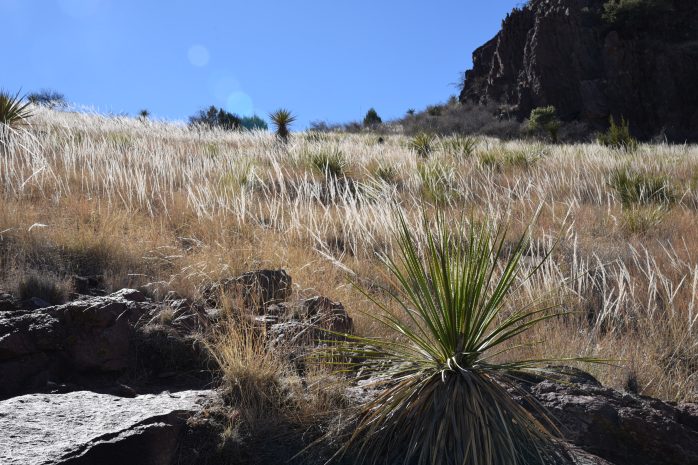 I am sitting here gazing up at the Davis Mountains in West Texas, sipping on a hot cup of Ginger-Lemon tea, as I contemplate my next post.  We are hanging out at the Davis Mountains State Park outside of Fort Davis, Texas while we wait for a mail drop.  I chose this spot because I had heard good things about the beauty of this area, and about some interesting places to visit.  Since we had to wait a few days for our mail to arrive, there would be plenty to keep us occupied here.  As it turns out, even more than I first anticipated! 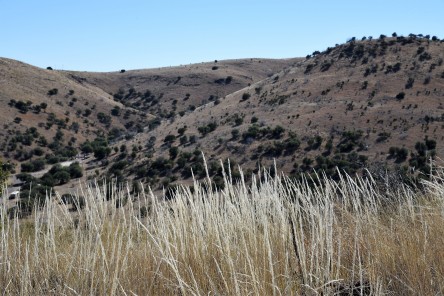 I am on top of the world right now as I write.  It doesn’t take much to get me there!  We are camped in the *tent* area of the park because we didn’t want to pay for hook-ups and are quite used to boon-docking.  And also, because hardly anyone else is staying  on this side of the campground! There’s a bathroom/shower facility just a short walk down the road from us sandwiched in between two campsite loops.  We are one of probably two other campers sharing this facility.  The privacy is absolutely wonderful.  I decided to try out the shower facility this morning, and was pleased that I had the place all to myself.  I just returned from a luxuriously long hot shower …. you appreciate these small things in life after you’ve been living in a 25’ trailer and boon-docking for the better part of a month!  Showers are infrequent, and short!  Hence, the reason for my elated mood.  I was even able to plug in my hair dryer and dry my hair.  Pure indulgence! 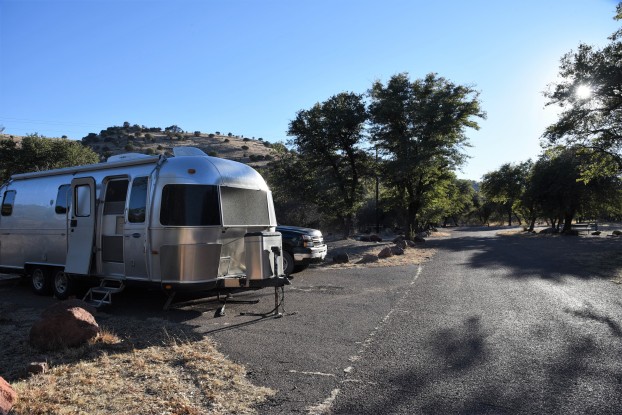 This morning is one of those rare mornings when Jim and I are not joined at the hip.  A couple of days ago, he noticed a *drip, drip* coming from beneath the truck – ever so slight but still cause for alarm and investigation.  He disappeared underneath the truck for a spell the morning after we camped for free at the Marfa Lights Viewing Area on Rt. 90 (it’s really nothing more than a glorified Texas Wayside).

The good thing about this spot was that we were on pavement and the *drip* was more noticeable.  Otherwise, I’m not sure he would have discovered it.  He was unable to pinpoint the source of the leak right then, so we went on our way and landed in this state park just a short 20 miles or so up the road from Marfa.

After getting set up on our campsite in Davis Mountains State Park, he once again disappeared underneath the truck.  I knew something was up.  I did what I usually do at times like this – I took off for the closest park Wi-Fi hotspot and stayed out of his way for a spell.  He usually does not want me hanging around bothering him with irrelevant questions while he tries to analyze a situation like this.  I’m too distracting.  I have no mechanical ability whatsoever and therefore, I’m no help, and actually more of a hindrance.

Jim is the ultimate trouble-shooter.  I’m sure I’ve mentioned this before.  He is a talented guy when it comes to figuring out issues – mechanical, electrical, you name it – saving us many dollars over the years with his can-do, do-it-yourself attitude.   And he has transferred this coveted trait to our sons.  Between the three of them, there is literally nothing they cannot accomplish (in my humble opinion –  maybe I’m a bit biased).

I sauntered back a short time later to discover that he had identified the issue.  A small part of the fuel line had started to rust, and was the source of the slow leak.  Not exactly an easy fix as it was near where the fuel line entered a box that acted as a cooling chamber for the diesel.  (At least, this is what Jim told me) I don’t understand any of this – so my perception of the problem might be somewhat askew – but close enough.   Bottom line – we had a fuel leak and it had to be fixed sooner rather than later.

View of the CCC-built Indian Lodge from the trail

After a short hike the following morning on the Indian Lodge Trail, we headed into the small town of Fort Davis.  Jim had some thoughts on how to fix the leak and wanted to find a hardware store.  I wanted to mail off a small gift to my sister-in-law who was forwarding us mail on occasion, and we needed just a couple of items at the grocery store – mainly half and half for my morning coffee!  🙂  We noticed a garage on our way into town advertising auto parts and Jim decided to pop in there and see if they had the parts he needed.

The young mechanic offered to take a quick look under the truck, and one thing led to another, and that’s how I find myself alone this morning.  Jim is in town at the garage getting this nice young man to fix the fuel line.  Yesterday, he told Jim what parts to purchase at the local hardware store, and said he could work on the truck the next morning.  What service!  Jim usually does his own mechanic work when he can, but we discussed it and came to the conclusion that trying to fix a fuel line in a state park campground might not be a wise decision.

Life on the road is not all fun and games my friends – it has its ups and downs! Mechanical issues are bound to happen.  We are getting better at going with the flow when this occurs.  There are still those everyday things that need attention, too – things break and need maintenance, bills have to paid, expenses and income have to be meticulously tracked, receiving mail has been a challenge now that we are not stationary, the list goes on and on.   With our most recent unexpected problem, we’ve had a positive experience in this little town of Fort Davis.  Some of the stress that occurs when your only vehicle needs repairs, and you’re in a strange town, has been relieved!  Jim even decided to have this mechanic rotate the tires to even out wear and tear, and also grease the front-end – whatever that means!  I guess it’s important though.  The local folks have been friendly and very helpful.  Real Texas hospitality…

So, this is why I’ve found myself enjoying some solitude this morning, along with time to conjure up the best approach to writing about Big Bend National Park and our stay in this little bit of paradise.  One thing I’ve discovered since traveling around the region in and around Big Bend National Park is that this whole geographical region refers to itself as the Big Bend.  It includes the towns of Terlingua, Study Butte, Presidio, Marfa, Alpine, Marathon – and beyond.  If you study a map of West Texas, you can connect the dots and see the expansive area that encompasses the *Big Bend*.  To be clear, I’ll be focusing next on the national park – then, I’ll share some of the broader, geographical area that we’re visiting now (such as Davis Mountains State Park – where the pictures in this post originate).

Big Bend is a diverse, unique place.  It is a landscape that includes several different types of ecosystems and a population of plant and animal life that is unsurpassed.  For many species, Big Bend represents either their northernmost range, or their southernmost range.  The transition between the three distinct ecosystems creates an environment conducive to enhancing the biodiversity of the region.

Since the river, the desert and the mountains are primarily what defines this park, I’ve landed on a pretty obvious yet practical way to share our adventure there.   Three posts – each concentrating on one of these distinctive habitats of the park.

2 Comments on “The Big Bend – more than just a park”