Yosemite: Outside the Valley Part I

Posted on September 9, 2016 by lynnsreversegapyear

When most people think of Yosemite, the popular photographs and landscape paintings of El Capitan and Half Dome come to mind.   Yosemite Valley is the main hub of the park and the place I had visited on two previous occasions until this summer.  While the valley is impressive and not to be missed if you have never been to Yosemite, there are less crowded areas of the park that are worth exploring.  Since we are stationed in the Eastern Sierras this summer, we had the unique opportunity to get to know the less publicized region of the park.

Tioga Pass Road (Route 120 west) from the east is an imposing road that climbs precipitously through the steep, rocky slopes of the Eastern Sierras to the Tioga Pass entrance to Yosemite.  Given our close proximity to this geographic region of Yosemite, we decided to  focus our summer exploration of the park to this general area.  It has not disappointed us.

On our first visit to Yosemite in early summer, we stopped at the Tuolumne Meadows Visitor Center.  Generally, my first inclination when visiting a new park is to stop and peruse the information in the visitor center to orient myself to the area.  This gives me much needed material in the form of maps and guides so I can chart out future trips and highlight specific trails and places of interest I want to pursue.   I left the visitor center with a local trail map as well as a wildflower identification book and The Laws Field Guide to the Sierra Nevada – a guide to plants and animals.  I was armed with the essentials now!  I’m never happy unless I have a book in my hand! (I also stamped my all-important passport book, of course!)

We discovered a nice trail accessed from the visitor center parking lot.  It would take us past some historical points of interest and also provide us a workout hiking to a picturesque lake and to the top of Lembert Dome.

We walked from the visitor center parking area and found the trail across the road.  This hike would take us on several trails that intersected with each other, ultimately forming a loop back to where we started. 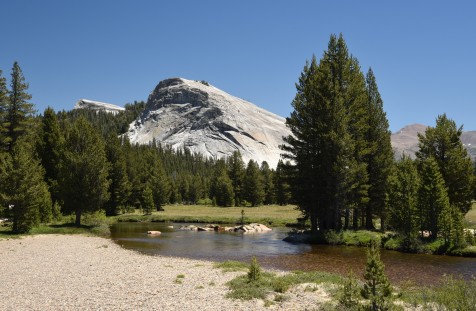 The trail is relatively flat going into the meadow, and crosses the Tuolumne River offering up fantastic views of Lembert Dome to the east.  On the other side of the river, the trail ascends gradually to Parsons Memorial Lodge, a National Historic Landmark dedicated in 1987.

This lodge was constructed as a memorial to Edward Taylor Parsons, who was a member of the Sierra Club and an active, vocal opponent in the losing battle to avert the flooding of the Hetch Hetchy Valley for a reservoir to supply San Francisco with drinking water.

It was built in 1914 and has served as a meeting place for the Sierra Club, as well as housing a library of material significant to this area.  It is open to the public, and during the summer a popular program called the Parsons Memorial Lodge Summer Series is organized with presentations including poetry readings, naturalist talks, storytelling, and music.

Near the lodge continuing east toward the Lembert Dome trail access, you pass the Soda Springs Cabin and the spring itself.  The Soda Spring is a carbonated, cold-water spring.  John Baptist Lembert laid claim to 160 acres surrounding this spring back in the mid 1880’s and built the existing cabin on the site near the spring.

It was thought to be a springhouse.  He raised goats in this area for several years before eventually becoming a guide for tourists and a naturalist.  Lembert Dome was named for him after his untimely death in 1897.

We continued on to the Lembert Dome parking area, where we would pick up the trail to the dome.  Partway up this trail, there is a side trail to Dog Lake which we decided to take.  It would be a perfect spot for lunch, and then we would backtrack to Lembert Dome and continue our hike to the top of the dome.

Dog Lake was situated in a serene spot overlooking some mountains and has a nice beach area on the west side of the lake.   It was a pretty lake surrounded by mountains, and not terribly crowded.  The hike to Dog Lake is steep at the onset so likely a reason there is less traffic.  I have to admit I was mostly curious why it was called Dog Lake but could not really find any obvious reason upon reaching the shore.  The lake was not shaped like a dog! (my first thought)  It was not surrounded with Pacific Mountain Dogwood trees (common in western Yosemite).  I read later that it was called Dog Lake because a geologist surveying the area found an abandoned litter of puppies by the lake.  Go figure!  Never would have guessed that! 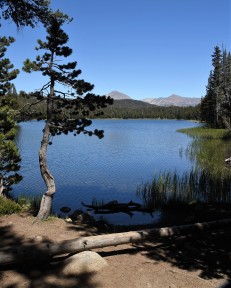 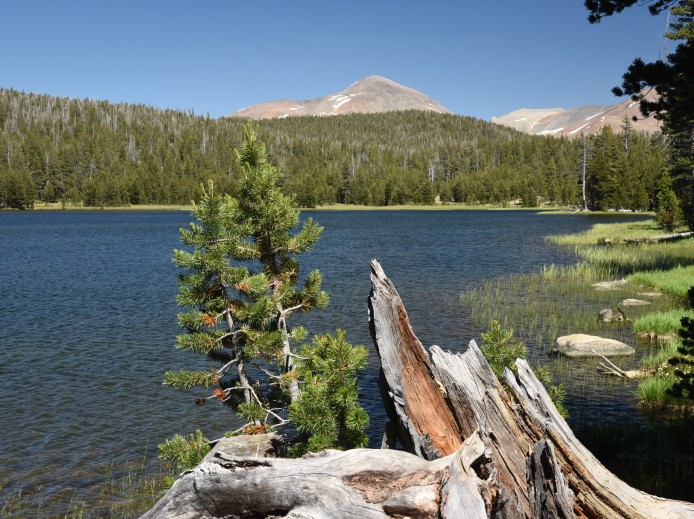 The really cool thing about Dog Lake was the abundance of wildflowers blooming along and around the shoreline and trail.  It was the perfect time of year to witness the flowers of several plants that thrive in this sub-alpine environment.  There were drifts of Phyllodoce breweri (Purple Mountainheath) and Rhododendron columbianum  (Western Labrador Tea) along the shore that literally took your breath away. 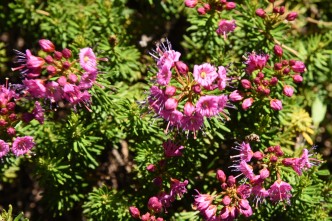 I also discovered several other species of wildflowers along the trail leading to Dog Lake that were not familiar to me.  I love the challenge of identifying new plants and have since noticed these same plants growing along other trails we have hiked this summer.  And, of course, I was discovering the abundance of one of my favorite plants – Aquilegia formosa – Columbine.  In researching plant identification sources for this area, I found a great online resource for wildflower hunting in the Eastern Sierras.  It is published by the Bureau of Land Management. 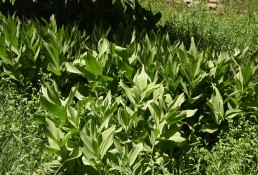 We found a quiet place to eat lunch, and then headed back down to the intersection with the Lembert Dome trail and continued our trek to the summit!  It was quite an impressive climb to the top of the dome – albeit not exactly the same as scaling Half Dome, but still scary for this cautious hiker.  Lembert Dome is one of several granite dome rock formations in Yosemite Park. 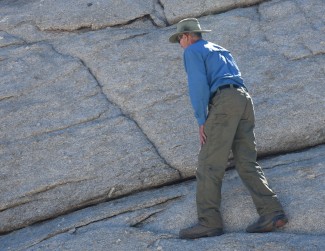 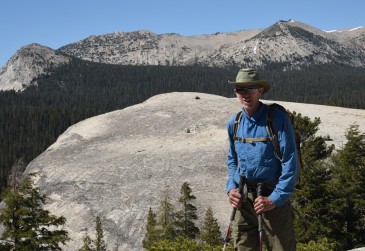 It took me a while to get up the nerve to scramble up the steep granite rock face to the top, but I did it and was rewarded with spectacular views of the Tuolumne Meadows area.

Since it was getting late in the afternoon, we decided to continue down the Dog Lake trail to Tuolumne Lodge and catch the shuttle back to the visitor center.  This was the steepest part of this trail, and I’m glad we were going down this section!  We had to wait about 20 minutes for the shuttle, but it was worth it as we got dropped off right near our truck.  The whole hike was probably somewhere around 6 miles from start to finish.  I would recommend this hike as an introduction to this region of Yosemite since it passes by some historical sites and offers a moderate hiking workout with the exceptional reward of  reaching the summit of Lembert Dome.

← In Search of California Gold Rush Towns
Mono Lake: A Sanctuary for the Soul →