Posted on March 15, 2020 by lynnsreversegapyear

On February 8th, my sister and brother-in-law suggested a field trip to the Cibola National Wildlife Refuge and I enthusiastically accepted! There are nine different wildlife refuges in Arizona and we were close to several of those while in the Quartzsite area.

Cibola NWR includes an area of 8,444 acres surrounding the floodplain region of the lower Colorado River. It was established in 1964 in order to repair and recreate habitat from damage done to the marshes and backwaters of the area due to flood prevention measures. The refuge seeks to simulate the original habitat and has reestablished wintering grounds for many migratory waterfowl and other wildlife.

I’m always interested in the origin of names.  The name Cibola was given to the area by Spanish explorers to the region and rumor has it that the name originated from the legend of the Seven Golden Cities of Cibola. Early explorers believed that these legendary cities existed somewhere in the Southwest. Cibola was also the ancestral home of some of the Native American tribes of the region including the Mohave and Quechan. They farmed in the rich floodplain soil during the dry season and migrated to the desert uplands to hunt and gather during flood season.

The town of Cibola has a history as a farming community since the late 1800’s and there is a historical marker in the area with the following inscription:

“Gold and silver strikes in the 1860’s created growth in the area. It is said Wyatt Earp served as sheriff of Cibola for one year in the 1890’s. The town of Cibola formed in 1898 and construction began on a 16 mile canal to bring water from the river to the town. A post office operated here from 1903 to 1933, serving the farms, but the irrigation project failed. Floods were a yearly event until dams were built on the Colorado River. All the remnants of Cibola are now located on nearby private property.” 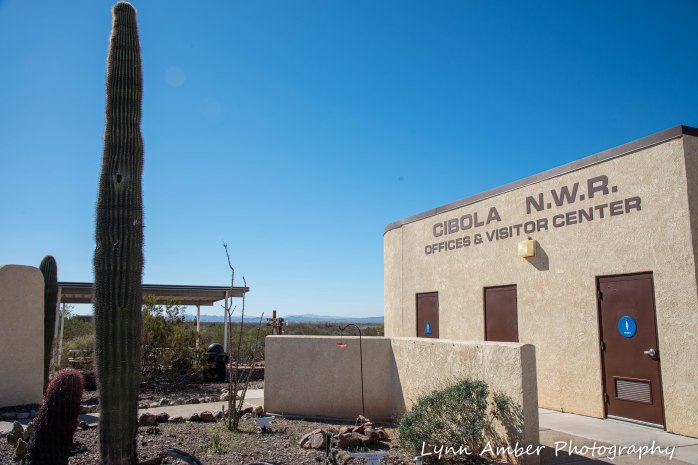 The Cibola NWR visitor center is open during the winter season daily from November through the middle of March. Visitors can stop in and view the small exhibit area and get information on activities within the refuge. There are several short trails for hiking and an auto tour road around the refuge. The refuge is also open to hunting and fishing opportunities.  Volunteers staff the visitor center and live on site in employee RV sites.  There are opportunities in many NWR’s to do this type of volunteer work.  I would love to be in a position some day to volunteer at one of our nation’s many refuges.  For more information on these opportunities, visit the Fish and Wildlife Service website.  The woman who we chatted with in the visitor center was volunteering at Cibola for the first time.  She spends her summer’s working in the Grand Canyon.  I also found out she was from a town in Colorado close to where I will be working this summer at Great Sand Dunes National Park.  She gave me some good tips on places to visit and, most importantly, which grocery store was best in Alamosa!

We opted to walk two of the short interpretive trails – the Desert Trail and the Nature Trail.  We also rode the short 3-mile auto loop road near the visitor center and then explored the southern part of the refuge by vehicle. This involved following some improved dirt roads along levees and through marshes and wetlands.  We traveled through the Hart Mine Marsh Unit and along some of the levees.

The Desert Trail is adjacent to the visitor center and was constructed in 1996 by the Youth Conservation Corps. There are numbered posts throughout the walk that match information in an interpretive brochure that can be picked up at the visitor center.

The Nature Trail starts at a small parking lot along the Goose Loop Auto Tour.  It’s a short 1-mile walk through a “restored riparian forest and mesquite bosque.”  (from the Goose Loop brochure)  This habitat of mesquite, cottonwood and willow supports many wildlife species including bobcat, mule deer, coyote and the rare Colorado River cotton rat.   I learned that the mesquite tree cannot germinate and therefore spread unless the seed is eaten.  Coyotes play an important role in this process – eating the seeds and spreading it around after digestion and elimination.  Fascinating!!  There is a wildlife viewing deck half-way through the hike that overlooks a pond teeming with overwintering waterfowl. 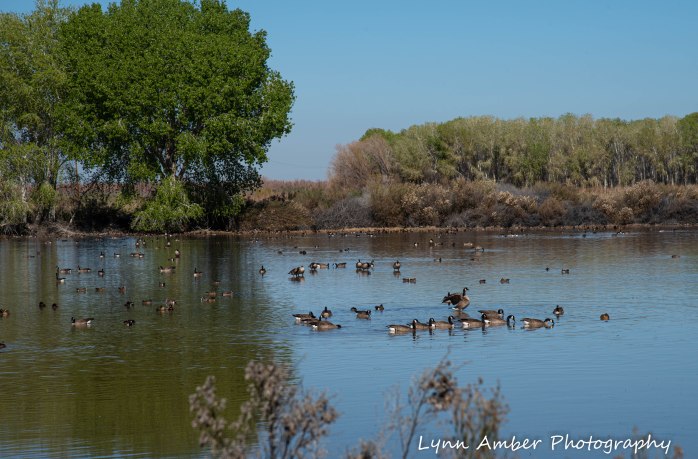 This auto tour is a 3-mile loop that takes you through part of the refuge.  It is advised to remain in your vehicle so that  the wildlife is not disturbed – with the exception of the Nature Trail walk.  The loop traverses some cultivated corn and alfalfa fields and along Long Pond.

Along the drive, Farm Unit 1 includes cultivated crops that provide foraging opportunities for overwintering wildlife.  We were able to view masses of Sandhill Cranes in the cornfields and saw a coyote hunting in the alfalfa fields!

Leaving the Goose Loop Auto Tour, we proceeded south deeper into the refuge and traveled some of the dirt roads through the Hart Mine Unit area.  This route took us along some of the levees and also along the Colorado River.  We passed by some small marshes and ponds along the way as well.

Many thanks to my sister for recommending this day trip.  We have not seen each other very much over the past few years – sometimes going more than a year without being in the same neck of the woods – and I learn something new about her every time we visit.  I learned that she shares my enthusiasm for learning about wildlife and nature – such fun!!

← Somewhere in the Mojave…..
The “Nellie E. Saloon” Desert Bar →

(c) 2020 Lynn Thomas Amber All Rights Reserved  Unauthorized use and/or duplication of this material without express and written permission from this blog’s author and owner Lynn Amber is strictly prohibited. Excerpts and links may be used, provided that full and clear credit is given to Lynn Amber and Lynn Amber – Travel and Photography with appropriate and specific direction to the original content.