Posted on April 23, 2019 by lynnsreversegapyear

Pierce’s through the morning air

Straight into my heart.

Spring has arrived and with that the time has come to get ready to depart for Maine and my summer job in Acadia National Park.  I’m never quite sure what to expect when we “wake” up the Airstream after its long winter’s nap!!  It was a record-breaking cold, snowy winter here in the Northeast and with that comes uncertainty as to whether  the Airstream was negatively affected.

We undertook a number of precautions to winterize the trailer last fall.  We plug in to an exterior outlet on my son’s garage instead of removing the batteries.  That serves to keep the batteries charged over winter.  When we store the trailer for extended periods of time, we drain all the water lines and blow air through them to make sure we have removed all moisture that could freeze and damage pipes.  In addition, we pour RV-rated antifreeze into the traps located under the sinks and shower.

The interior of the Airstream is booby-trapped with numerous mouse-deterring weapons of mass destruction – a plug-in ultrasonic rodent repeller, a number of ordinary “snapper” traps, and some of the latest electronic traps.  The result is an enormous minefield of injurious devices!  We also evaluate and tighten up any exterior holes where rodents might gain entry and I scatter Downy fabric squares throughout the trailer – in drawers, cabinets, and closets.  We remove all food items and anything else that is fragrant and might be attractive to rodents.  All those measures work together to insure minimal rodent damage even though we all know how crafty these little guys can be!  I always expect some evidence of rodent occupation.

In preparation for traveling, we spent several days last week at my son’s house in southern New Hampshire where we store the Airstream – to get her ready for the road and habitation once again.   Our initial walk-through assessment confirmed that we came through the winter pretty good from a pest control perspective.  A couple of quick checks periodically throughout the winter had revealed some minor rodent penetration – with two or three mice caught in our minefield.  We removed the corpses and reset the traps for the remainder of the winter.   There was no visible damage anywhere from their gnawing little teeth – which was also a relief and no more unfortunate mice in our traps!

While I should have a check-list of standard items to review and check each spring, we usually just brainstorm a quick list of necessary tasks prior to getting started.  And, of course, I always retrieve my trusty Airstream handbook and run through the maintenance recommendations it so nicely outlines.  The manual is also good to have nearby when needing to reference any of the system information for minor repairs.  We normally find something that needs our attention each year.  The trailer is 17 years old and things wear out over time.

First on our agenda is to fill the fresh water tank and sanitize all the lines – checking for leaks as we go.  We have yet to accomplish this task without at least one minor leak!  This year, the same pesky leak occurred at the spray nozzle for the kitchen faucet.  It was worse than usual, and we decided it was time to just eliminate this problem.  I literally never use this spray nozzle, and I’ve wanted to install an under counter dish soap dispenser in its place since we purchased the trailer.  In my opinion, a much better use of this space.   Jim purchased the necessary items to plug up the hose under the sink and we found a soap dispenser at the local hardware store.  Here’s where Murphy’s Law kicks in.  Of course, the threaded extension for the soap dispenser that goes in the hole left by the spray nozzle was an 1/8” diameter wider than the existing hole.  I researched how best to cut Corian and found that a jigsaw would be the perfect tool.  So, Jim used a jigsaw and some files to widen the hole in the counter-top in order to install the dispenser.  It took a tad longer than he expected but he got the job done and the dispenser works great!  😊

We also had a small leak where the water line goes into the shower.  Jim has had to deal with this spot before, and he fiddled with it and tightened the connections – which appears to have worked.  As a precaution, I purchased a replacement diaphragm kit for the vacuum breaker on the shower side of this connection just in case!  We’ve had to replace this before and I wanted to have an extra one on hand.  We also opted to purchase a new stainless-steel flexible hose for the shower.  The old plastic one was starting to show considerable wear.

With water in the lines, we tested the operation of the water pump as well as the water heater.  Both items appear to be working just fine!  I ran the water heater on both electric and propane with no visible problems and was rewarded with plenty of hot water!

All other major appliances received a thorough review as well.   The refrigerator reached proper temperature in both the freezer and the regular compartment powered by both electric and propane.  The heat pump started up just fine and ran smoothly.  It appears the Fall ice buildup issue and the bee’s nest we had on the heat pump last year did not produce any long-lasting effects.  I tested the gas stove top.  All burners worked with electronic ignition except the front burner.  This is often caused by some screws that need tightened or clogged holes.  I’ll deal with that later!  We have never used the oven.  The previous owner said that she had not used it either after it heated up more than she thought was safe.  I decided it would be nice to have the option of cooking in the oven instead of just using it for storage, so we did take a closer look at this.

Referring to the oven/stove manual in the Airstream handbook, we lit the pilot light and checked the temperature and operation with an oven thermometer.  I can’t say the temperature was very accurate at first, but it did seem to improve once it heated up.  A fair amount of heat emanated from the back of the stove while we were testing the oven which the manual says is normal.  I definitely needed to run the outside vent to keep the “smoke” alarm from being triggered when we opened the oven door.  We may try to cook something and see what happens but I’d still like to have the oven operation checked by a professional once we get to our destination.

One thing we have noticed over the past year is the floating vinyl floor has separated in a couple of spots due to the movement of the trailer during transit from place to place.  It’s not horrible but Jim wanted to tap it back in place in two or three noticeable spots.  This required removing the drawer under the sofa so he could tap the floor boards from that end.  When he slid the drawer out, he noticed that the left-hand slide was broken.  Luckily, we were able to order a new slide from a local hardware store and will need to fix that before we hit the road.  With the drawer out of the way, Jim was able to tap the floor pieces tight and he decided to fasten them down under the sofa (where the screws would not be visible) to see if that would prevent any further movement.  We’ll see how that works!

Jim tapped the flooring back in place from underneath the sofa

Fastening down the flooring under the sofa… 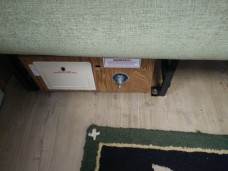 An experiment to see if this prevents future floor shifting!

Meanwhile, I laundered all linens, towels and blankets and gave the trailer a complete cleaning.  All dishes, silverware, pots and pans were removed and washed as well.  The cabinets were wiped down with Murphy’s soap,  the windows including the window wells were scrubbed and I vacuumed the screens to remove dust build-up.  I referenced the manual and watched a YouTube video on how to dismantle the Fantastic Fans on the inside so I could thoroughly wash the blades and screens.  Wow – amazing how much better they look debugged and dust-free!  I also went through every storage bin and weeded out items we did not need to keep hauling around – accomplishing a little re-organizing as I worked. 😊  I have decided to create an Excel sheet listing each storage location in the trailer and exactly what is housed there.  While going through this process, we are finding stuff that we had misplaced or thought we lost!

Once the inside inspection and repair work was completed to our satisfaction, we moved to the exterior.  Jim started on the roof of the Airstream – washing and inspecting all seals and caulking along the way.  I was checking for any noticeable leaks on the interior while he washed and noticed a wet spot underneath the inside trim of the skylight.  We realized that the larger, concentrated amount of water from washing the roof was causing a small leak around the skylight.  With just a normal rain, there was no leak.  Jim noticed the caulk appeared to need replacing and while checking out the skylight itself, he saw some small cracks around the screw holes.  We decided this would be the year to replace the old skylight.  It was clearly disintegrating on the inside as well when we removed the inside trim to inspect it from that angle.  I researched replacement skylights on the Airstream Forum (love, love, love that forum!) and found a company that specializes in Airstream replacements.  Our new skylight is ordered and Jim will have to replace it at some point this summer while I’m in Maine.  It will not be delivered before we leave unfortunately.   In the meantime, he is going to beef up the caulking around the skylight to prevent any more leakage until the new one is in place.

What’s left?  We need to fix the slide on the sofa drawer and wash and wax the outside of the trailer.  And then, we should be good to go!! 😊