Posted on September 8, 2018 by lynnsreversegapyear

After work today, I headed to one of my favorite spots on the island.  Strolling along the paths and carriage roads around Little Long Pond during the early evening is both meditative and rejuvenating.  It is an activity I engage in at least once every week.  I decided to try and capture one of Rockefeller’s infamous carriage road bridges for my Day 7 photograph.  I have walked to this bridge numerous times this summer.  Usually, late in the day, I am rewarded with solitude while enjoying the ambiance of the Cobblestone Bridge and the gentle sound of the Jordan Stream as it flows over the rocks and under the bridge.  Today was no exception.  The Cobblestone Bridge was the first of the bridges to be constructed on the carriage road system.  Constructed in 1917, it is the only bridge built using the rounded cobblestones.

I took several shots from different perspectives on both sides of the bridge.  I also captured some close-ups of the small “waterfall” cascading over some large rocks just before the stream passes under the bridge.  I was not happy with my wide-angle photographs of the bridge.  They were quite frankly very boring!  Finally, I decided to set the tripod up close to one wall of the bridge and take a shot along the side.  It was the best of the photos I took of the bridge.  I focused primarily on the stones in the curved section of the bridge.

I have made it a goal to visit all of the Rockefeller Bridges this summer.  So far, I have physically visited all but one and taken photographs of all but three. 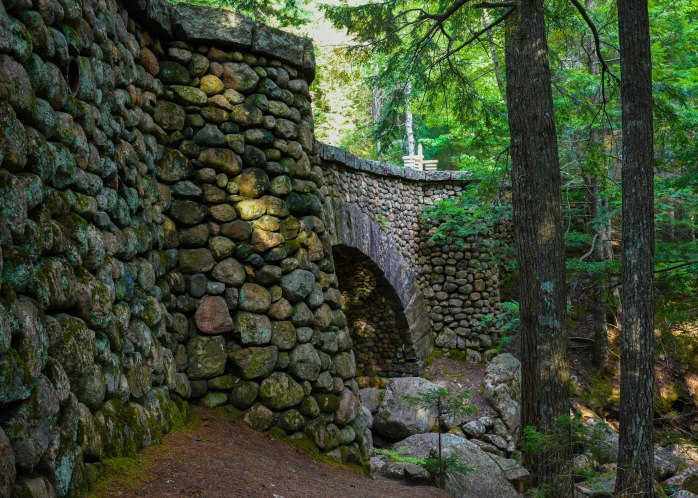 We have not had much rain here on Mount Desert Island this summer and as a result the Jordon Stream is low.  I took the time to capture the small waterfall under the bridge.  It’s subtle beauty never escapes me whenever I visit here.