Things that Go Beep in the Night

Posted on March 6, 2017 by lynnsreversegapyear

I told you I would be re-visiting the use of book titles for my blog post headings!  Albeit, a slightly modified version from the original “Things That Go Bump in the Night”.  And, no this is not a modern-day RV ghost story.  It is a story about strange noises in the night, though 😊  (enjoy some pictures from along the Natchez Trace Parkway while I tell the story!)

We’ve been working our way north to Vermont, and are currently navigating the Natchez Trace Parkway in Mississippi.  (I’m remembering that old rhyme to help me spell this state we are in! M-I – crooked letter, crooked letter – I, etc……)

It was 4:00 am on Thursday, March 2nd.   I awoke to the sound of a very annoying *beep*.  The sound was reminiscent of a smoke alarm when the batteries are getting low, you know??  It was followed by another *beep* a few seconds later, and continued with this pattern.  We laid there for a few minutes hoping that it would miraculously cease and we could go back to sleep.  That miracle was not to be.

Jim thought it sounded like the smoke alarm, but I have a birds-eye view of the LP Gas Detector from my side of the bed and I noticed it was no longer registering the reassuring *green – all systems are good* light.  It was glowing *orange*.  We could not smell any gas so we were not immediately alarmed.  But, we also knew that we had to investigate.

Jim climbed out of bed, grabbed the flashlight and examined the detector.  There was nothing written on the instrument (that he could easily see) explaining what the orange light meant.  He strolled over to the front of the trailer so he could examine the propane heater.  Our first thought was that the heater pilot was not igniting when it fires.  He confirmed that it was indeed lit, and pushing out hot air. He then checked the burners on the stove top and everything seemed okay there.

He went back to the detector, and pushed the re-set button to see if was just a malfunction with the detector.  Nothing changed.  And, the detector is hard-wired so we knew it was not a failing battery.  There was only one thing left to do, and that was to consult the Airstream manual.  It was cold outside, we were in a fairly remote area along the Natchez Trace Parkway, and were not inclined to shut off the propane and abandon ship – just yet.

View from the top of Jeff Busby Park

It took me a while to find the information I was looking for – remember that it was 4 am, right?  So, with my mental faculties still waking up, I first scanned the user manuals that are nicely organized in the back of our Airstream manual.  I could not find one on the LP Gas Detector.  It literally was the only one missing!  So, then I migrated to the section within the manual that deals with all things LP Gas.   I hit the jackpot here. 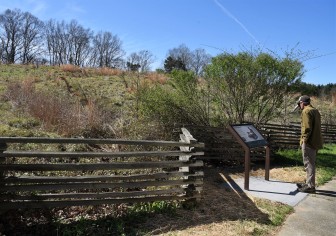 It turns out that if there was indeed a gas leak, the detector would be flashing a *red* light in addition to an alarm.  That was a huge relief!  An orange light with an intermittent beep means that the detector itself is failing and needs to be replaced.  Well, that was good news in one sense.  It meant we were not in imminent danger.  But, it also meant that we had to get a replacement detector.  This was not going to happen at 4 in the morning, and we needed to get the blasted thing to stop beeping so we could go back to bed!

Since it is hard-wired, we could not just remove a battery.  We checked out the fuses to see if perhaps it utilized a unique fuse.  Nope.  No such luck.  Next thing I know, Jim has the wire cutters out – so you know what happened next!  We would deal with it in the morning. It was a great collaborative effort on our part and encouraging to know that we could work together to solve a problem at such an outrageous hour.

I started researching LP Gas detectors online the next morning.  It did not appear that we would find the same model detector in a physical store anywhere near us.  We are inclined to replace this with the same detector.  I had read in the manual that it is recommended to replace the detector every 5-7 years.  This was a new discovery.  It’s always good to occasionally read your owner’s manual 😊  I’m pretty darn sure it was the original detector which meant it was already 15 years old.  I rationalized that if this one lasted 15 years then it must be high quality, and I would replace it with the same one.  That’s how my mind works. 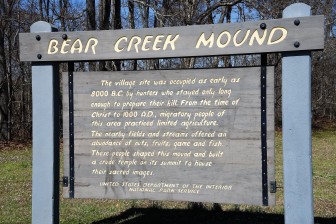 Another early example of habitation of the trace by ancient peoples 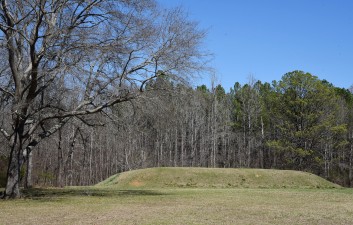 Some of the other LP gas detectors did not have such reliable reviews.  Or, were inclined to malfunction on a regular basis.  I even read where they are often set off by dogs passing gas!  Ha!  Beware you RVer’s who travel with pets!  That was interesting.  Anyway, we decided to wait until we get home (which will be in just a few days) before replacing the detector.  I think we will be okay until then.

I suspect that our early morning escapade and lack of sleep probably contributed to the accident that occurred later that same morning.  Jim woke up before me around 7 am and started on the morning coffee routine.  I climbed out of bed and skirted around him at the kitchen counter, and headed into the bathroom.  A moment later, I heard a loud crash, and a series of expletives coming from Jim.  I was not sure I wanted to come out of hiding, but I slowly slid the bathroom door open so I could peek out and see what had happened.

We have a one-cup drip coffee filter that we use to make coffee in our thermos mugs.  So, we make one cup at a time with the filter delicately balanced on top of the mug.  His mug full of freshly made coffee along with the filter had tipped over, and landed on the floor spraying coffee and coffee grounds EVERYWHERE.  And, I do mean everywhere.  On the adjacent cabinets, on the kitchen throw rug, on the floor, and in all the cracks and crevasses.  I’m not sure I would have believed there could have been that much liquid and coffee grounds for just one cup of coffee, had I not witnessed it with my own eyes.  I’m still sweeping up coffee grounds days later.

Our cardinal rule about taking up the dish drying mat (which is not a stable surface for preparing coffee) had not been followed.  I can only surmise that lack of sleep had interfered with Jim’s brain cells that morning.  The kitchen rug is still drying in the back of the truck while we travel!  Needless to say, our departure that morning was somewhat delayed due to clean up efforts.

We will be home for a couple of months before heading out on the road once again, and have a growing list of things to do – both with the house and with the Airstream.  I’m not sure 2 months will be enough!  Wish us luck!  I will also hopefully get caught up on my backlog of blog posts.  So much more to share! 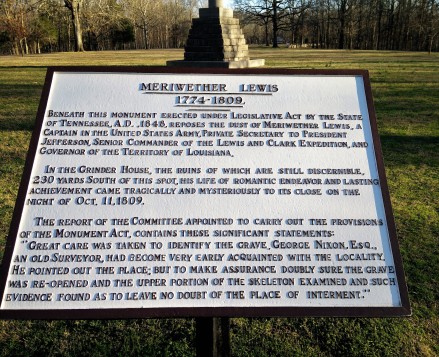 As I mentioned at the beginning of the post, the pictures here were taken along parts of the Natchez Trace Parkway – a beautiful, quiet, well-maintained road that connects Natchez, MS with Nashville, TN.  The 400-plus mile parkway is part of the National Park Service, and is a great alternative to interstate travel if you have the time to meander through this landscape, and absorb some of the old history of the trace and its inhabitants.  It is also lightly traveled in early March and made for a very relaxing drive.

There are 3 NPS campgrounds along the parkway that are beautiful and free.  They are a model for how all NPS campgrounds should be maintained,in my humble opinion.  We are very impressed with them.  While there are no hook-ups, the sites are paved and easy to access.  We stayed at the Jeff Busby campground and the Meriwether Lewis campground.  Also, good to note that the visitor center in Natchez, MS allows overnight parking with electric hookups – all free as well.  We stayed there before launching our drive along the parkway, and enjoyed an evening stroll through the quaint town of Natchez.

I recommend checking the parkway vehicle regulations before making plans to travel this route.  There are restrictions regarding length and height.  I believe the length limit is 55 feet and the height of your rig must be below 13’6″. 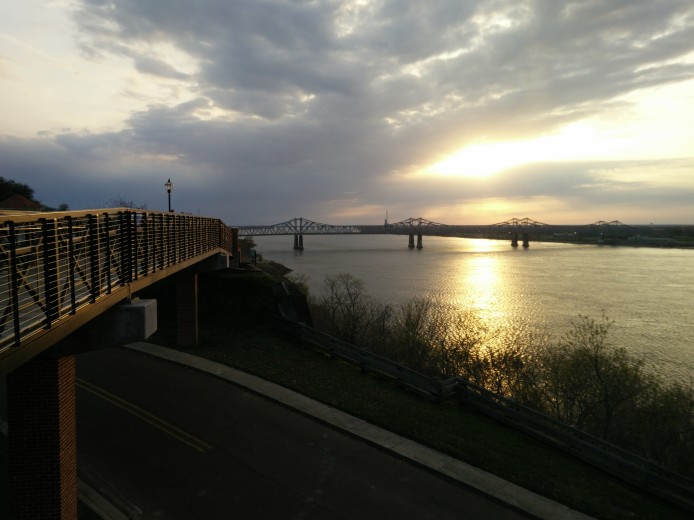 Scenes from our walk around Natchez, MS

2 Comments on “Things that Go Beep in the Night”