Posted on August 16, 2016 by lynnsreversegapyear

We left Glacier NP on Monday, June 27th with three days to travel to our new posting at Oh Ridge Campground in the Inyo National Forest near June Lake, Ca.   I planned a route that would take us through Idaho along the scenic Selway-Bitteroot Wilderness Area and the Salmon River watershed.

We stopped in Polson, MT on our way south out of Kalispell to fuel up and stock up on food.  There is an excellent grocery store on the north end of town.  Polson sits on the southern end of Flathead Lake within the Flathead Indian Reservation, and the scenic Route 93 that runs along the western side of the lake is noteworthy.   It’s a very picturesque drive.  We continued south on 93 through Missoula and on into Idaho.

By the time we arrived on the outskirts of North Fork, ID it was getting to be early evening. We came upon a general store with an RV park attached to it, and decided to check it out as a place to stop for the night.

The North Fork RV park sat behind the store and restaurant and was curiously empty.   Upon investigation, the young woman in the store said it would be $29 per night with full hook-ups.  We had our pick of treeless, open sites.  It turns out the place is family operated, and they had just completely re-done the small RV park, and just re-opened.   They did have small trees planted at each site that someday would provide shade.  The family was very nice, and the older couple who own the place are building a very nice house adjacent to the campground.   Loving all things construction, the lines of the unfinished house beckoned to us and we walked over to investigate after we got set up.  The setting was actually quite pretty, although even in the early evening temperatures here were in the 90’s.  We got a quiet night’s sleep and woke up refreshed.

On Tuesday, we passed through some of the prettiest country I’ve ever seen.  Once we left North Fork and headed along the Salmon River, we realized there were many, many national recreation area campgrounds right on the river that would have been a much better place to camp the night before.   Oh, well – next time!  The scenery between the towns of Salmon and Challis was especially spectacular.

We stopped at the Colston Creek picnic/boat launch access area for a rest.  I used the pit toilet facilities here, and much to my surprise they were sparkling clean and the inside walls were completely painted with an amazing mural by local students!  The mural depicted local flora and fauna.  Totally blew me away!

Jim could not resist getting refreshed in the Salmon River while we wandered around the shore of the river looking for birds nesting in the cliffs above us. 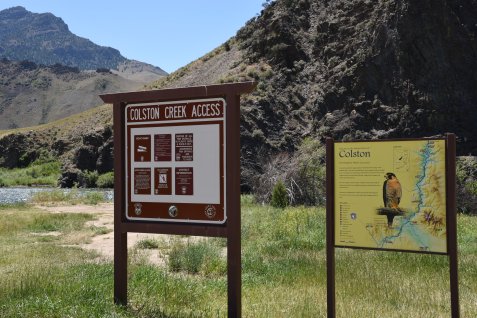 We turned off of Rt. 93 so we could take the scenic Route 75 through the Sawtooth Valley and up and over Galena Pass at 8,743-foot elevation.  This road also bypasses Sun Valley so I was sure it would be spectacular.   It did not disappoint me.  Shortly before the town of Stanley, we noticed a small museum on the right hand side of the road and had to stop.

The Stanley Museum is located in the historic Valley Creek Ranger Station and is on the Historic Landmark Registry.  It is operated by the Sawtooth Interpretive and Historical Association.  The museum displays many local artifacts and photographs that offer the visitor a glimpse into central Idaho history and culture.  Behind the museum sits a small building that houses a unique cold storage room – an above ground root cellar.  It was fascinating!  The building has 32-inch wide walls insulated with sawdust and although the outside temperature was in the 90’s, the inside of this room was very refrigerated. 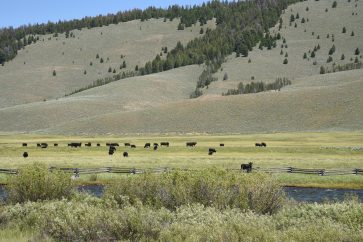 We left the museum and started up the road heading for Galena Pass.  Just shy of the pass there is a scenic overlook that offers an unparalleled view of the Sawtooth Valley below.  The overlook is dedicated to Bethine and Frank Church.   This politically active couple were instrumental in helping to establish the Wilderness Act of 1964 and conserve this area of Idaho.   Bethine was present for the dedication of the overlook and shared a favorite quote of her husband’s (the former Senator who helped to establish the Wilderness Act): “I’ve never known a person who felt self-important in the morning after spending the night on an Idaho mountainside under a star-studded sky.”  It is a great place to rest on the steep upward climb to the pass and reflect on the beauty of the valley and the people who work to make it possible to enjoy such wilderness. 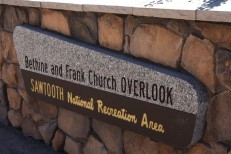 Pressing onward, we passed over the summit and headed down towards the towns of Ketchum and Sun Valley.   Oh my goodness, we hit a serious traffic jam in Ketchum and any thoughts of detouring through the town of Sun Valley disappeared quickly.   Even in the summer, this is a very busy area.  We managed to get out of this congested area without any mishaps and our focus now was on getting some miles behind us.   We needed to get to Route 80 and start heading west towards Reno and the detour over the Sawtooth Scenic Byway was worthwhile but cost us some time.

By sundown, we had reached Wells, Nevada.  Now, to be honest, my least favorite stretch of road in the entire country is Route 80 through Nevada! The interstate here is sprinkled with small towns usually boasting a few truck stops, RV parks and casinos.  It’s always hot and dusty when I am traveling through as well which does not add to the charm.  It was approaching dark and we had to stop.   I decided to take a chance on the Angel Lake RV Park situated on the western edge of town.  I’ve no idea why I chose this particular RV Park – more or less a toss of a coin, and further away from the casinos!   It turned out to be okay.  The woman in the office was extremely nice and offered us a space that gave us some privacy from the other mostly seasonal RVer’s camped there.   Apparently, this RV park is home to seasonal mine workers who stay here for extended periods of time.  Since these workers spend many hours a day working, the place was quiet!   They are either working or sleeping.  Anyway, for one night it suited us.

Our destination today was Oh Ridge Campground in June Lake, CA and the main objective was simply to drive.  We figured we would reach the campground around 3pm in time to get set up and meet our new co-workers.  We bypassed around Reno by detouring on Route 95 in Fernley and picking up Route 50 towards Carson City and then headed south on scenic Route 395.   This road runs parallel to the Eastern Sierras and is truly a remarkable drive.  We would have made our destination on time too, if not for a slight issue with the truck.   Seven miles past Gardnerville, NV we were climbing a hill and the truck just lost power, the engine light came on and we had to pull over.   The diagnosis was most likely a bad fuel filter, and we unhitched the Airstream so Jim could travel back to Gardnerville for parts.   I stayed with the Airstream!   The engine light had gone off on the drive back to Gardnerville, so he got back with parts in hand and we hitched up and continued on our way.    Still, it was a delay of several hours.  We still got to the campground before dark and settled in.   Our first impression upon entering the campground and seeing the mountains and lake was “Thank goodness”.   Now, this was a place we could spend the summer!