Posted on August 6, 2016 by lynnsreversegapyear

On Monday, June 20 we headed up into Glacier NP after filling up on our free KOA breakfast, and stopping at a carwash to scrub both truck and trailer.   At the West Glacier entrance, Jim signed up for his senior pass and we asked about possible camping.   We were directed to either Apgar CG or Fish Creek CG and after touring the two quickly, we landed at Fish Creek for the first 4 nights of our week long stay and moved to Apgar CG for the remainder of the week.

The park had opened up the B loop of Fish Creek campground a week early due to bear activity on the other open loops, so for the next few days the loop was first come, first serve (normally reservation only).   The sites were spacious and were mostly pull-throughs.  Our site was level enough that we did not have to adjust anything but the front jack!   It was getting on toward late afternoon once we got set up, so we ate quickly and decided to drive up the Going to the Sun road in the early evening.  It was a beautiful evening and the scenery and colors along the route were breathtaking.   A good choice to drive the famous road in the evening.  We avoided the daytime crowds and went as far as the Logan Pass Visitor Center and turned around.  I must say that the road did live up to expectations.  Many, many photo ops!

When we were at Logan Pass, we noticed that some of these higher trails were closed due to snow cover, but you could still hike back to Hidden Lake from the visitor center.  We decided to tackle this hike the next morning since it was not a long hike, and not much elevation gain.  We were still feeling the altitude!

During our week-long stay in Glacier, we completed three hikes.  All the hikes were fantastic.  Here’s a brief recap of each hike.

The trail to Hidden Lake from the Logan Pass Visitor Center was still mostly snow-covered but manageable in our hiking boots.  There was still a sizable amount of snow up here, and we saw numerous skiers hiking up some peaks and skiing down! 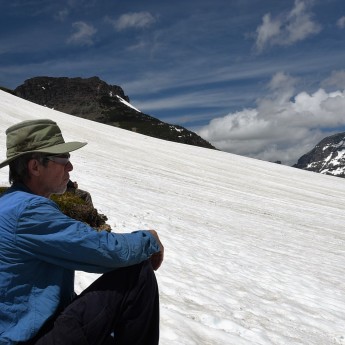 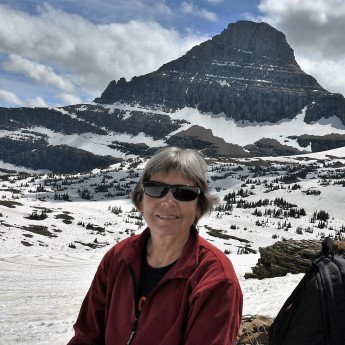 The walk back to Hidden Lake was a fairly level hike with minimal elevation gain, as I said earlier.  This was a good thing as we were definitely needing to acclimate to the altitude.   Walking was slow since we were trekking through snow, but this was okay.   I was savoring the incredible beauty of the area and taking many photos, so going slow was just fine with me.

Two miles back on the trail, there is a lookout point which offers a view of Hidden Lake below.  An interpretive sign on the lookout details the environmental impact of our warming climate on this area.  A photo taken in the 1930’s shows how much the area has changed as the warming temperatures have permitted a rising of the tree line.  The increase in forested area means a decrease in the alpine meadow area, threatening many species that depend on the alpine meadow for both food and survival.  This part of the trail near the lookout was a *local* hangout for the mountain goat population here in the park.  They were tame and enjoyed posing for many photos!

Most people on the trail turned around at the lookout and headed back down to the visitor center.  Of course, I was bent on continuing on down to the lake.   The sign saying *you are now entering grizzly bear territory* deterred me somewhat – but I forged on.  Jim was lagging a bit behind me, so I hiked alone for a while taking comfort in the fact that there were several other folks in front of me.  When I noticed the fields of Glacier Lily though, I took pause.  Apparently, the tubers of this lily are a favorite food of the grizzlies.  I figured they did not have much else to eat this time of year, and decided to head back.  (I had not yet purchased the bear canister spray that everyone carries!)   So, I did not make it down to the lake, but it was getting towards evening anyway – another reason to exit grizzly country – and we had a long drive back down the Going to the Sun road to camp.

This trail was heavily traveled and I’m sure a popular one all summer long.   Great short hike for children, or those not wanting or liking a long hike.

A couple of days later, we decided to hike the Avalanche Lake Trail since it was lower in elevation and would not be snow-covered.   It proved to be a very popular hike.   We are not fast movers in the morning when on vacation, so it is usually around 11am when we are arriving at trailheads.   Not an advisable practice when traveling in populated national parks.   Oh well, we survived the parking space race. After looping around the trailhead parking area several times, I finally got out of the truck and circled around like a vulture waiting for someone to leave.  Finally – I was lucky enough to be in the right spot at the right time.   I guarded the open space aggressively while Jim made the loop back around to find me.   Success!

This trail was crowded and if I were to do this hike again I would choose to go much earlier in the morning.   However, that said, it really was a spectacular hike along the Avalanche River.  There were parts of the river that flowed through rocky *canyons* where the elevation drop was more significant, creating wonderful little rapids and waterfalls.

This hike was mostly wooded as compared to the alpine meadow hike we took to Hidden Lake.  So, a refreshing change of scenery and ambience.

I was happy to discover some familiar wildflowers

including one of my favorite plants – Tiarella – in bloom.

I also noticed a type of Clintonia – which I later identified as Clintonia uniflora or Queen’s Cup.

We even skirted by a sleepy little snake on the trail.  I’m surprised we did not step on him!

I would say this is a trail for families with young children since the elevation gain is insignificant and the trail length manageable for children.  And the reward at the halfway point of the trail is a nice lake with a beach area for picnicking and playing.

Now we’re talkin’ – a real hike!  The Loop Trail starts part way up the Going to the Sun road on the West Glacier side – at the hairpin turn in the road.  This was the *piece de resistance* of our stay in Glacier.  I absolutely loved this hike.  The hike climbs steadily to the Granite Park Chalet to the tune of a 2,200-foot elevation gain in 4 miles.  It starts by going through a burned out area teeming with new plant life, then traverses through an open meadow, and culminates with about a ½ mile walk through an enchanting fir forest with fields of glacier lily interspersed.

The view from the top at Granite Park Chalet is mind-blowing.   The chalet is not yet open for the season.  I think it opens July 1st.   The crew was busy cleaning in preparation for overnight guests.  On the way up the trail, we passed and talked with some of the folks coming down from the chalet who volunteer their time to help with the chalet cleanup every year.   One couple said they spotted a grizzly on the far mountainside when they hiked up to the chalet two days before.  We ate our lunch at a picnic table outside the chalet and hung out for a while enjoying the sheer vastness of the mountain scenery.

The Granite Park Chalet is a National Historic Landmark and was built by the Great Northern Railway in 1914.  It was one of the last structures to be built by the railway in Glacier NP.  It is now an overnight stopping point or destination for hikers.  But, watch out – it’s pricey and reservations are necessary!  But – oh, it sure  would be nice to stay up here for a night!

Jim was still getting his *hiking legs*, and on the hike down I moved somewhat faster, so I was by myself most of the 4 miles back, snapping photos of flowers and enjoying the solitude.   I was in hiking heaven!  Due to the elevation gain and length of this hike, the trail was not crowded – the kind of trail I like and look for whenever possible!  I was often alone on the trail (I had by this time purchased the bear spray canister) and kept a keen eye out for grizzlies but alas I did not see one.  We both felt pretty good about getting this hike under our belt, as the elevation at the top was not that much (6800) but the gain and length of the trail was challenging.  We were coming off a six-day drive, and working up to this hike with the two shorter trails was perfect.

In between hiking and relaxing, I spent some time job searching while Jim worked on doing some routine maintenance to the truck.   I discovered a sweet little public library in Columbia Falls where I could access WiFi, while Jim scoured the town for a decent auto parts store.   He is sold on Reilly Auto Parts, by the way.   They helped us out a couple of times along our travels.  On Saturday, June 25while sitting in the library surfing the workamping job scene, I got a FB message from my sister and brother-in-law.   The company he is working for in Tahoe had a job opening for a couple – one doing maintenance in the campground, and one to work in the kiosk checking in campers.  The position was further south in the eastern Sierra’s near Yosemite NP.   We had thought we would stay in the Glacier area, but this was a good deal and just the type of work we wanted.   I looked up the  company website as well as the campground to get a sense of the area – dry, high desert interspersed with pine trees surrounded by 10,000-foot mountain peaks.  Yeah – I could live there for the summer!   I called the district manager and was offered the job on the spot.  I like to think it was my sparkling phone personality and our resume that got us the job.  But I’m realistic.  They just needed bodies to help keep the national forest campground afloat!

We were heading to California!  They were willing to wait for us to make the 3-day drive from Montana and I started planning our route.