Posted on January 21, 2017 by lynnsreversegapyear

That sounds very romantic, doesn’t it?  We did have the pleasure of viewing the full moon casting its light on Laguna Madre but I did not get a photo.  Sorry!  The full moon on January 12th was over the lagoon during the very early morning hours.  I did not notice the time.  All I know is the bright light woke me up!  Since our bedroom window faced the lagoon, we had a spectacular view of the moon and its reflection across the bay.  Instead of scrambling to get dressed and grab my camera for a nighttime shot, I just laid there and enjoyed it.  While I did not capture it *on film*, I did register that image into memory bank.

Throughout my life, there have been moments in time like this that I will always treasure.  These are not necessarily earth-shattering events but subtle flashes of ordinary occasions that stand out for me.  Like standing outside our old 240 Volvo in Avalon, NJ with baby Leif in my arms, gazing in at the keys in the ignition of the locked vehicle.  Or watching Leif take his first steps while visiting his Grandma Amber in Cape May Courthouse.  Like sitting in the rocking chair, gazing down at Luke while nursing him in the wee hours of the morning.  Or remembering the seriously intent look on Luke’s face when he was tasked with carrying the crate containing the baby ducks hatched in Leif’s first grade classroom out to our car.  We were taking them home to raise to adulthood.  There are many, many more of these split-second memories and watching the moon over Laguna Madre will join the list for sure.

Okay – back to Padre Island – the good, the bad and the ugly as promised.  I’ll let my readers decide where these labels apply 🙂   Padre Island is an imposing environment harboring a diverse landscape that includes beaches, dunes, wetlands, coastal prairies and tidal flats sandwiched between the salty waters of the Gulf and Laguna Madre.  The forces of nature are evident here in a big way.

We arrived on Padre Island facing a weather forecast that was somewhat ominous – gale-force winds and abnormally high tides.  I had seen a blog posting by a fellow Airstreamer that showed them happily camping on the beach at Padre Island, and was determined to give this a try despite the weather.  We pulled into the visitor center late in the day to ask about camping on the beach and were directed to South Beach. 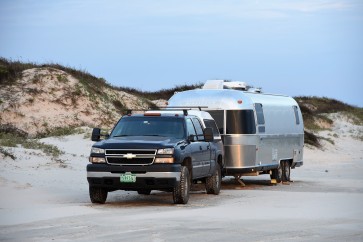 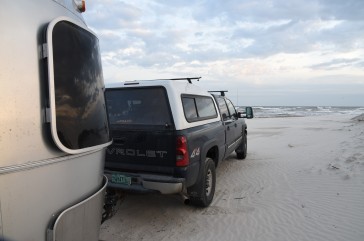 South Beach starts where the pavement ends in the park, and from there you can drive for miles on the beach and camp.  The first 5 miles of shoreline is deemed safe for two-wheel drive vehicles (and brave RVer’s pulling a rig).  After that, 4-wheel drive is recommended and serious towing fees are imposed for recklessly ignoring the conditions.  It was interesting to learn that the 60-plus miles of shoreline in the national seashore from South Beach to the tip of the island is actually considered a public road in Texas.

We drove to South Beach, and found a spot on the sand just a tad off the paved road.  It was very windy, and the surf was definitely up.  We could tell that the spot we chose was above the high tide mark and it was fairly level and somewhat protected by several dunes on the gulf side.  It was home for the next 6 days.  We had too much sense to venture any further out onto the beach! 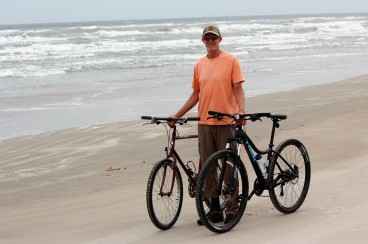 Some things to take into account when camping on the beach on Padre Island. 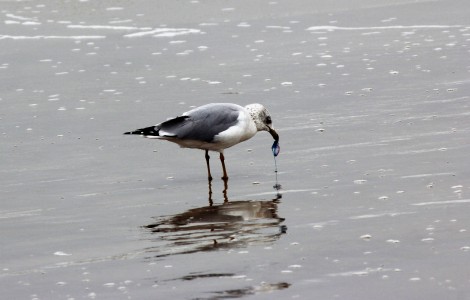 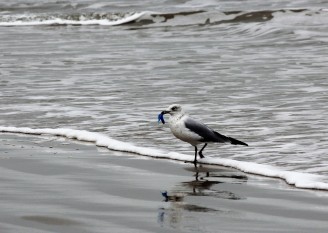 Lots and lots of bird activity on the beach – Padre Island is a sanctuary and migration stop for many bird species. 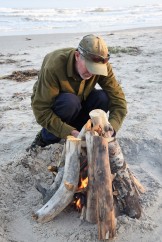 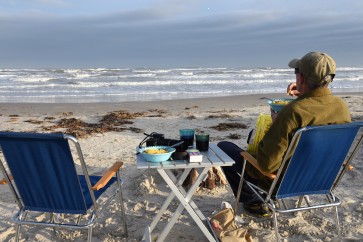 New Year’s Eve on the beach! A perfect evening! 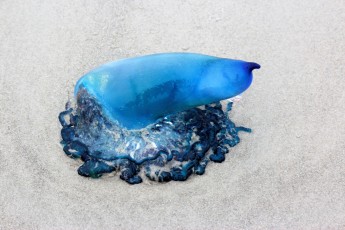 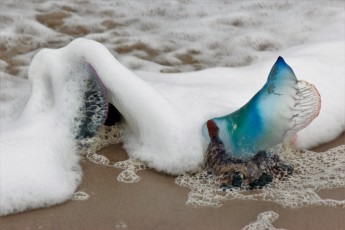 The surf was so strong while we were there that these Portuguese Man-of-War’s littered the beach.  Interesting that they are actually siphonophores – animals made up of a colony of organisms.  Whatever – they are something to see up close! 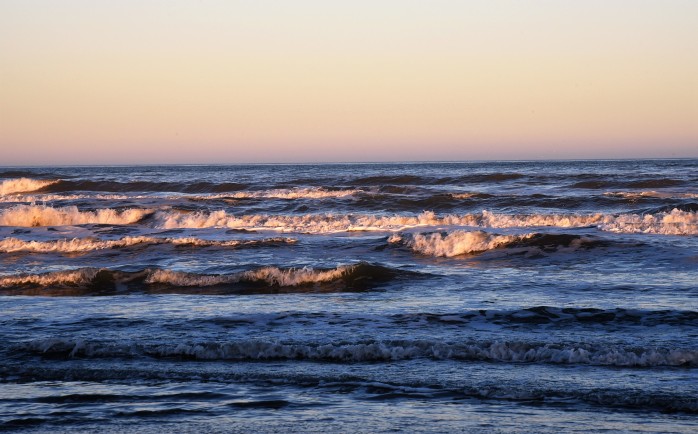 After spending six days on the beach, we decided to move over to the Laguna Madre side of the island and experience life on the bay.  There are two established campgrounds in the park.  The Malaquite CG is located on the gulf-side just a short distance from the visitor center.  Bird Island Basin CG sits on Laguna Madre and actually resembles a large parking lot more than a campground.  It was less crowded than Malaquite and we found a spot towards the far end of the lot with space all around us.  With Jim’s interagency senior pass, we spent a whopping $2.50 a night to camp here.

Laguna Madre is an incredibly unique environment.  I was totally unaware of this until arriving here and reading about this lagoon.  It’s a very shallow, ultra-saline body of water and home to a diverse bird and fish population.  Bird Island Basin is also one of the most popular wind-surfing destinations in the country – for good reason!  Did I mention it’s windy here??????? 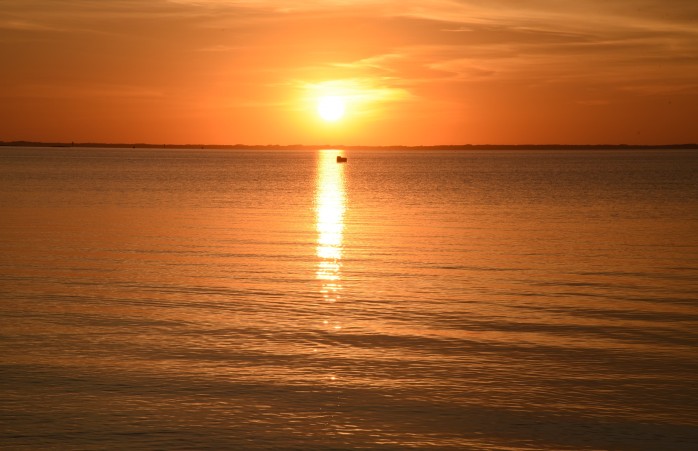 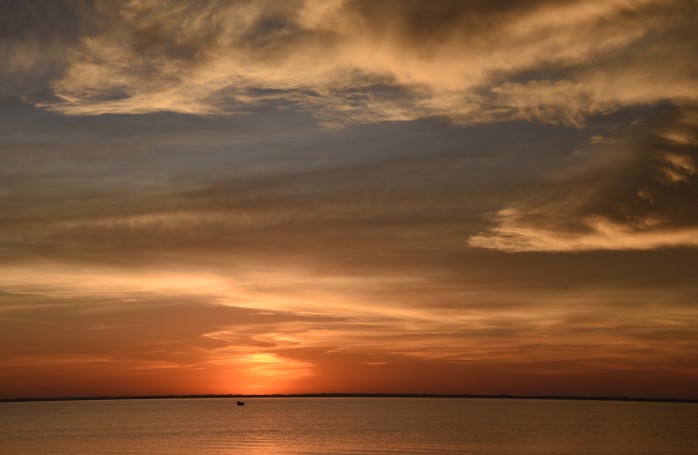 By far, one of the most beautiful sunsets I have ever experienced occurred our first night on the Laguna Madre

While it did feel like we were camped in a parking lot, we actually really enjoyed our stay at Bird Island Basin.  We used up the rest of our allotted days in the park here on the lagoon.  There were several other campers here for extended days and we met some very interesting folks.  The comradery experienced among campers is truly unrivaled. The only downside to staying here in Padre Island is the amount of generator use.  On the beach, we really did not notice it much since we had no one camped right next to us most of the time.  But, at Bird Island, it was prevalent.  There are no hookups in either campground and generator use is allowed from 6am to 10 pm.  And some folks took full advantage of that.  We were lucky to have tent campers on one side of us most of the time.  And the setting made up for having to endure some generator noise on occasion. 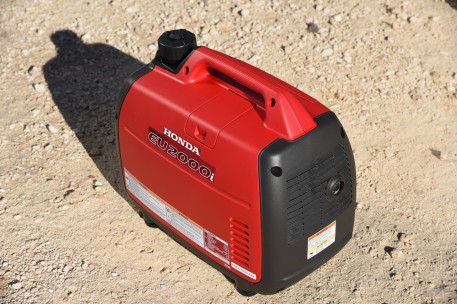 Okay – so I should mention that we contributed to that generator noise on a small scale!  It got incredibly cold and windy for a few nights and we had to break down and buy a generator!

My fondest memories from Padre Island: 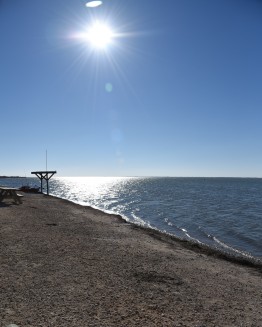 Views from our campsite along the lagoon

It was not all rest and relaxation during our stay on the island.  We completed a major project while camped at Bird Island Basin – getting our 200 Watt solar panels mounted and hooked up.   That’s another story  🙂

2 Comments on “Moon over Laguna Madre”